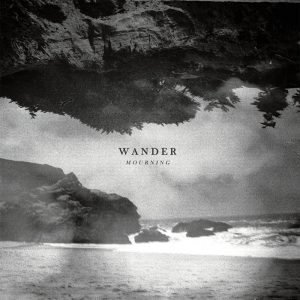 Released on March 11, 2016 via Other People Records

First off I’d to clear any possible confusion about Wander. First, they released Short Story Collection vol. 1 under the name Wander ???, or Waking Wander and then changed their name for their second release Mourning to simply Wander. That was back in 2014. Now that they’ve switched labels, they’re re-releasing Mourning. So many people have bought and listened to and loved this album already, but now (as of my writing this) it’s on pre-order… again. See, now you’re much less confused, right?

Confusion aside, it’s still worth writing about again. Already, the post-rock scene has experienced a renewed sense of curiosity towards Wander, since releasing a music video through Alternative Press, and treating their 2014 album like a 2016 album. Regardless of the situation, it’s an album worthy of your attention.

Mourning starts with a loud intro with everyone announcing their presence, and is followed by echoes, and silence. This instantaneous use of extreme dynamics will perk your ears, and grab your attention much faster than most other post-rock albums will. Already it’s different to 90% of all other post-rock albums, and we’re only 10 seconds in.

Something you’ll notice throughout the album is the sheer amount of energy and drive that powers the band. Typically, this much energy and speed means that the band will be relatively math or metal related, but Wander sounds like they’re intentionally avoiding such influences. They still remain vigilant in their genre, which is unique for this sort of music. Post-rock lately has become so muddled with so many other genres that sometimes I forget which genre is which. While I don’t mind most of it, and enjoy quite a bit of it, it’s nice to hear a change of pace within my favorite kind of music.

Wander continues to provide exhilarating music that is equally expansive as it is enthralling. However, I can’t shake the feeling that the music is essentially… basic. I can’t really think of anything that sets them apart from other bands. The instrumentation is nothing out of the ordinary, the production isn’t bad at all, but it’s not amazing either. There’s no newfound technique, and the textures and timbre all sound like other bands I’ve heard before. Believe me when I say that I love this band and would recommend it to anyone who enjoys post-rock, but there’s nothing to be found within Mourning that graduates it from good to spectacular.

Wander’s friendly and easily accessible sound solidly plants them as a good step further into the world of post-rock for people just getting into this genre, and as a good recommendation for those of us that have been into this scene for any amount of time. It’s a perfect addition to any post-rock playlist that you’d make, and they deserve all the praise in the world for their efforts; they made a good album.