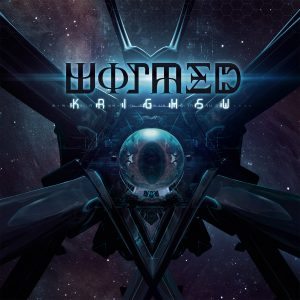 There’s a constant with technical death metal that is always integral to break: the constant suffocation of monotony that can encompass the genre. Don’t get me wrong, a lot of the musicians are akin to classical composers; treating their guitars like grand pianos. But there is a point in the genre where the bands blur too much because of their seemingly inability to slow down and write something distinct. Wormed have never had that problem though.

Krighsu only comes three years after Exodromos, not ten years. Thank Sithis. That’s not to say that Exodromos wasn’t worth the wait. Wormed totally delivered on that end. But you reach a point of impatience when you age ten years and hunger for a new instalment. But maybe, you might think, they just need that much time to craft a well put together album. To that I’d say that Krighsu would like to have a word with you.

Wormed have been weaving a tale of nanotechnology and space horror in the course of the last several years. As I once said, it was like locking Aurthur C. Clarke and Isaac Asimov in a dark room together and forcing them to come up with a story. Wormed waves bleak expose amidst an obvious love for technical loquaciousness. And Krighsu is an instalment that is worlds different from Exodromos.

The darkness that coated their previous release has been replace by bestial aggression. Krighsu is a release that has more blood on its mind than an attempted understanding at its bleak future and desolate solitude. It’s an album that’s more interested in the war its waging, and wage war it does. Songs are far more crushing this time around. The opener ‘Pseudo-Horizon’ is the first declaration. Phlegeton’s vocals are still as strained and threatening as ever, along with the duel guitar assault of Migueloud and J. Oliver, bass of Guillemoth and the inhuman drumming of G-Calero. There’s no messing around here. The airlock has been shut and the boys aren’t playing around with emotions this time.

What’s more is that the album still sounds and feels like its been recorded in the vacuum of space. Perhaps not as much as Exodromos, but there’s still no breathing room here. It’s like Wormed worked extra hard to ensure that they suffocate the listener even more. Songs work on building intensity and even when they’re taking a melodic approach still feel like they’re strangling your windpipe. ‘Computronium Pulsar Nanarchy’ is a particular standout track that encompasses almost every sound Wormed goes for and only leaves a few seconds of breathing room.

So does Krighsu suffer at all in its dark, lost cosmos? No, the album always manages to mix things up with out making the old tech-death mistakes of over compensating by having too many meter changes or too many riffs. Wormed keeps everything just enough in line that they only graze this line on occasion but otherwise keep songs distinctive and exciting. See: ‘A-Life Omega Point’.

Wormed have done it again. Though Krighsu isn’t as desolate or lonely as Exodromos felt, the album makes up for it in aggression time and time again. There’s still moments where it sounds like the band is making reports into a blackbox which always serves to up the moody ante. As far as tech-death goes, you can’t get much better than Wormed. Not only do they serve up some fantastic mood and aggression, they also have written a space opera that is more exciting than 99% of science fiction published today. And whether you like that or not, Krighsu is still worth the trip time and time again.