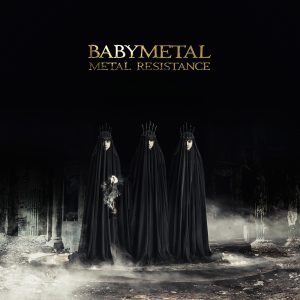 There hasn’t been a band in recent times who have divided opinion within the metal community more than Babymetal. Their unique fusion of metal with Japanese idol pop may displease some, but it propelled the band to fame and as a result their second album Metal Resistance has been one of the most highly-anticipated releases of 2016. Fans will be hoping that the teenage trio will be able to replicate the success of their eponymous debut, whereas haters will be hoping that their new release will prove that the manufactured group were nothing more than a flash in the pan. As an unapologetic fan, let me reassure all those in the former camp that Babymetal have delivered once again.

The album gets off to a great start with ‘Road of Resistance’, which is already well-known because it’s been out as a single since 2015 and features DragonForce’s Herman Li and Sam Totman, whose contribution is unmistakable. It’s a collaboration that works well, as both bands are best not taken too seriously and the furious pace, which is such a noticeable trademark of most Babymetal songs, suits Li and Totman’s rip-roaring solos perfectly. The other real trademark of Babymetal’s sound is their pop-based choruses, which is no better demonstrated than in the following track, and also recently-released single, ‘Karate’. For me, this is definitely the strongest song on the album as it shows off the full package of what the band is about. The song is phenomenally well written and mixed to pull off the catchy yet crushing fusion of styles, with performances that do it justice.

And when I mention the performances here, I’m not just talking about the three girls who are the only named members of the band, because Babymetal’s backing band is also well worth a mention. You can tell that these musicians know what they’re doing when it comes to playing metal, despite the group’s pop origins. ‘Sis. Anger’ is probably the best track to demonstrate this, but there’s ample evidence throughout the rest of the album too, which is why I feel it’s a shame that these band members aren’t named so they could receive a bit more acclaim. What struck me with Metal Resistance, even more than the quality of the musicians, was the quality of the writing; something which is also done by unknown people behind the scenes who really do deserve a lot more credit than their anonymity allows.

This was also the most obvious difference between Babymetal’s two albums, as the overtly pop-based songs were dispensed with in favour of a more metal focus and greater experimentation. From the slowed-down and almost folky ‘Meta Taro’, to the electronic elements of ‘Awadama Fever’ and ‘From Dusk Till Dawn’, to clean guitars in ‘Yava!’ and even a full-on power ballad in ‘No Rain, No Rainbow’ (which is undoubtedly lead vocalist Su-Metal’s finest hour so far). None of these elements are so pronounced that they mark a real deviation from Babymetal’s core sound, but they do nevertheless add a refreshing level of variety, the lack of which was my one major criticism of their debut album. Obviously Metal Resistance can never have the novelty factor of its predecessor, but overall I actually preferred it as an album. It’s more consistent than Babymetal and can boast just as many stand-out songs (including ‘The One’, which is their first song in English and closes the album out in epic fashion). This album is not going to convert any haters, as they’ve fundamentally stuck to their winning formula, but it will be just as much, if not more, of a hit with their fans as their last one. Whether you love them or hate them though, Metal Resistance proves beyond a doubt that Babymetal are not just a passing fad. This band is going absolutely nowhere but up!