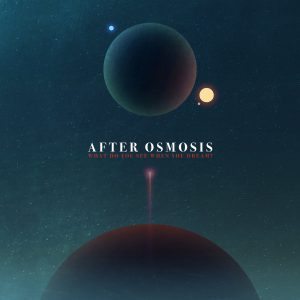 We’ve reviewed After Osmosis in the past, for their self-titled debut EP, and demanded that they release a full-length album. Apparently, they were listening, because now we have What Do You See When You Dream? to keep our ears preoccupied.

Even before listening to the album, I’d found it interesting already. I talked with the guitarist (and fellow Echoes and Dust writer) A.J. McQuay and he claimed that he came up with the album’s title, track titles, and then composed the music to fit the titles. On top of all that, the track titles compose a poem about the images dancing inside our slumbering heads. I’m already in love with this album, and I haven’t even talked about the music yet!

It begins with a dreamy ambiance, a sheet of synth covering a bed of floating guitar tones. It’s the perfect soundtrack to falling asleep in a bed you know well. The piano announces its arrival with a riff, coagulating into actual music, solidifying a melody. Things carry themselves as you would expect any post-rock track to, and it begins to swell in its layering and volume. All of a sudden an unearthly shriek emerges, proclaiming the forthcoming wall of sound, the great passage to mark the beginning of the end. And the wall arrives, right on cue. It’s loud, of course. Boisterous and triumphant, you can’t help but nod along.

My favorite here is without a doubt the third track, ‘Images of Days Gone By’. The title alone brings up memories like a flood. It took me several tries to get through the song, just because my mind would wander through my internal binders of photos, I had to replay it and attempt once more to pay attention. The acoustic touches in this song really make it stand out.

The music itself, outside of what it sounds like and what it makes me feel, is brilliantly composed, arranged, recorded, mixed, and mastered. Not a single step out of line. Even the studio in which they recorded the drums sounds perfect; just a touch of echo. I find it impressive that the bassist uses effect pedals so effectively, no pun intended. In track four, its easiest to tell that he’s using a fretless bass, a secret favorite of mine. The guitar effects and textures aren’t as diverse as they were in their debut EP, but they’re very deliberate. It’s definitely trying to be as dreamy as possible. I think in my notes I even wrote down ‘Holy Reverb, Batman!’

The album itself doesn’t endeavor to become a pioneer within the genre by any means, but rather it strives to portray itself as a perfectly executed conceptual album, and does so remarkably. My only complaint about this album is that the album could stand to be even dreamier. When it comes to post-rock, there’s no such thing as ‘too dreamy’. Seriously, go balls to the wall with ethereal goodness. I would also mention that 35 minutes for 8 tracks isn’t long enough, especially when the album is so damn enjoyable.

No matter how you listen to this, whether it’s with your crappy iPod earbuds (don’t even try defending those, you lazy listener, you.) or if it’s your hi-fi headphones, your computer’s setup, or even your car. It will sound amazing. And when you play it loud, it will sound even better.

I don’t imagine After Osmosis will call it quits after this, I imagine they have even greater heights to achieve. This album is a cautious but good step forward in the right direction. They’re trying earnestly to find their place in post-rock, and I like where that’s headed.