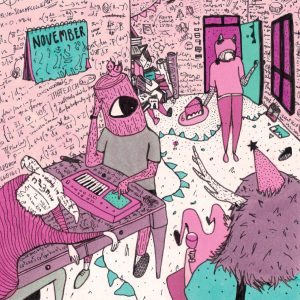 Stuck In November, a trio from Bangalore, India, has recently released their first album First Slice Of Cake and features the mind behind the solo project Deadstar as their guitarist. I can’t tell if Deadstar or Stuck In November is the side project, Nihal puts just as much effort into this album as he does anything else he’s released on his own.

A lot of the time, I have a hard time telling other small Mathrock bands apart, because it’s all twinkly fingerpicking and jazzy drums in 5/4 time, but First Slice Of Cake just stands out. It’s warm and thoughtful, rather than cold and calculated. It feels like a very natural sound to this band, and it shows. Everything inside this album all sounds distinctly different than all of the other Mathrock bands I listen to; it all sounds like Stuck In November.

If you’re ever looking for an album to listen to from beginning to finish during your commute to work, this is it. It’s short but sweet, high quality production, and maintains a steady grip of your attention throughout the album. I highly recommend this album to anyone who has a critical or discerning ear towards music, or anyone who’s a fan of Bob’s Burgers.