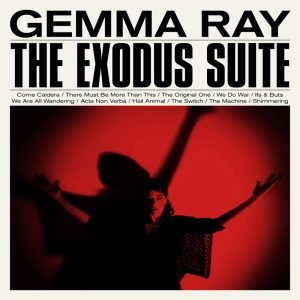 Released on June 10, 2016 via Bronzerat Records

Imagine the poignancy of booking a studio in a former iconic WWII airport hanger in Berlin to record your new album. Then, imagine 8,000 Syrian refugees housed in the hangar below the studio while you record. These inevitable ghosts embed themselves into Gemma Ray’s dramatic LP, The Exodus Suite.

The record is as haunting as it is magnificent – a true journey through the subjects of human empathy, our relationship with technology and with nature, feelings of abandonment and self-discovery. It was recorded live over seven days at the infamous Candy Bomber Studios, nestled within the former Templehof Airport. Intended to capture any ‘human flaws’, the record is profoundly raw and honest, whilst simultaneously demonstrating true musicianship and skill. On the unexpected arrival of refugees, Ray explained, “I realised that it gave an immediate mirror to some of the lyrics which are, though not political in any direct sense, influenced by these strange and tense times.”

I found the opening lyrics of ‘Ifs and Buts’ particularly poignant; catching the phrase “Some people, they just turn their backs and run / Preferring just to talk about the things they should have done”. Ray’s words are demanding and blunt – why aren’t we asking more from life, challenging the system and doing what we feel is right?

The Exodus Suite has an eerie introduction in the form of ‘Come Caldera’. Seductive, husky vocal tones draw you in, chanting “Life is more than this” along to a simple, rich organ accompaniment. However, this overture is quickly succeeded by more punctuated, tango-style rhythms, swelling tremolo guitars and fantastically dark PJ Harvey-esque vocals and harmonies in the following tracks.

‘There Must Be More Than This’ – the first song I heard via Gemma’s website – immediately caught my attention with its dirty bass lines, expertly combined with reverberant lead vocals, chromatic Wurlitzer runs and a relentless underlying beat. Its demanding rhetoric is thematic throughout the record; every artist (or indeed, every human) finds themselves soul-searching and asking for more from time to time.

The arrangements radiate power – be it in the form of a strong, punctuated rhythms, layered, formidable vocals or trembling Mellotron. Ray’s voice, however, is always starkly present; at the forefront of each musical delivery.

The final song (bar bonus track ‘Caldera, Caldera!’), ‘Shimmering’, is an eponymous glittering soundscape, lead by Ray’s vocals and personal choir. The wistful, dreamy setting is a fitting end to a bold album; a record that is challenging both in its intention and portrayal.