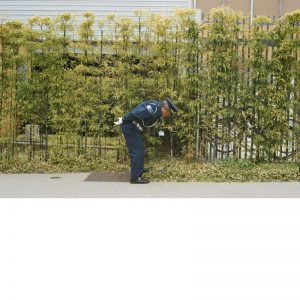 Good Luck And Do Your Best was initially planned to be something else entirely. Early in 2014 Gold Panda set out to Japan for the first of a pair of trips. This time a photographer, Laura Lewis, accompanied him as plan was to collect both audio field recordings from his trip across the country and accompanying visuals, with Laura tasked to capture what they saw and encountered together. The idea was to be able to put together something other than a traditional record; a sight and sound documentary of his time there, but the expedition ended up being the catalyst for a new record.

Despite the actual recording taking place in Panda’s native Chelmsford, all the album work is vividly that visual inspiration or documentation from Japan, as Derwin says. It began with the album title. On the way to Hiroshima Derwin heard taxi driver saying a farewell ‘ganbatte, kudasai’. Roughly translated, it basically means ‘do your best’, or it can also mean ‘good luck’. As a result of that chance interaction, Derwin says, he had the title for an album as well as a starting basis for the music. “Once you have a title, for me, things come together a lot easier for what it’s going to be.” Struck by the phrase, he ended up being led by the experience to make a record that is, to him “quite motivational, quite positive.”

“I went over twice. Once in April, once in October, and they’re the best times to visit, because the weather is calm – it’s not too hot or too cold”, Derwin says. This Zen state starts the album with grand fine trip-hop ‘Metal Bird’. Can guess this is not only starter for the album, but more a first perception of Japan itself – a delighted shiver and excitement of everything that comes noticed by the eyes.

‘Beats In My Car’ is very tranquilized slow-motion theme which makes losing the feeling of time and day. On one hand it feels like sunny hours with vocalizing. On the other – it has lovely oriental sample within and flows smoothly into nighttime dancy ‘Chiba Nights’. A peep of day comes with ‘Pink and Green’. The tempo gets gentle, the vocals come smoother. These three songs are perceived like one particular domain with some amazing trip story. But this is just an appetizer in dish terms.

Further material is more specific, with a degree of folkish sound which we westerners think is traditional and more psych at the same time. I can imagine that I am Real Punk motive would be played by local street artist. With specific oriental sound samples Gold Panda tries to deepen the audio story (‘Hyalards’, ‘Time Eater’) just like the inspiring journey came along but in electronic, sampled way, opposed to authentic mostly string instruments.

The journey ends on a delighted jazzy note ‘Your Good Times Are Just Beginning’. The Oriental concept is not vivid at that point. More likely it can be compared to the state of one who has just reached home physically but yet haven’t lost the taste of east trip. It is a transcultural blend of eastern minimalism, Eurodance and 90’s beats. It doesn’t lack authenticity but it is modern urban.

Gold Panda’s first perception of Japan (as he might plan more Asiatic invasions) reached its goal to be more the soundscape than just music. It absolutely needs some visual art maintenance to keep the immersion depth. Also I hope it becomes a well appreciated summer album to keep a motivational mood for summer-in-the-city folks.