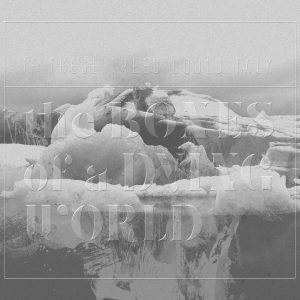 If These Trees Could Talk has in recent years become almost synonymous with other post-rock giants like Explosions In The Sky and This Will Destroy You. Their third album, Red Forest was an instant classic among fans, even the vinyl is highly sought after like gold, and shown off to friends who probably don’t care. And rightly so, Red Forest is one of the few albums I cannot find a flaw with, musically.

However, I believe the hype has ruined the album, or possibly the band members themselves. Up until now, the albums they’ve released have been showing an evolution of the band and their sound, a maturing process that all bands go through at some extent or another. The Bones of a Dying World have shown that this maturing process has come to a grinding halt.

I wish I could say that was once is no more, but that isn’t entirely true. What was, is the exact same as it is now. They haven’t changed a thing between albums, and it saddens me immeasurably. This isn’t entirely a bad thing. Seeing how they haven’t changed at all, the good things I liked in previous albums are still present in The Bones of a Dying World. The soaring guitars, dynamic basslines, and irreverent drumming still abide with an unavoidable presence. If you are a fan of If These Trees Could Talk, I can guarantee you that you will like what you hear.

On the other side of this coin there is ,again, the fact that this band hasn’t changed. There is absolutely nothing new in this album that would separate it from the others. It’s simply another If These Trees Could Talk album, and literally nothing more.

Several of the songs are in the exact same key and follow the same exact key progression, even the guitar’s tones are identical, making the album sound like Red Forest pt. 2 more than anything new. Too many times did I stop and think how basic this album is compared to other, more recent bands. Red Forest did such a good job inspiring other bands to sound like them, If These Tress Could Talk themselves get lost in their own noise.

One thing I cannot fault this album for is its production; it’s flawless. The more I listen to this monotonous disappointment, the more I hate listening to it, because it creates a stronger feeling of confliction the more it’s played. On one hand, I despise this album for its utter laziness, and on the other I praise it for its mixing and mastering perfection. It’s the most beautiful letdown of my life.