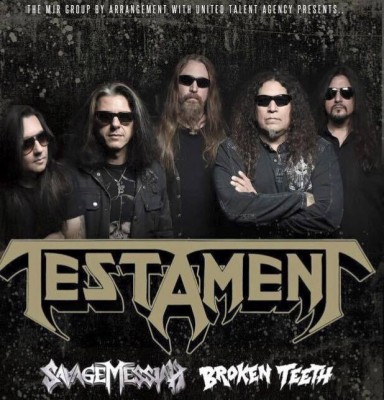 Seeing thrash metal legends Testament show up on O2 Academy, Oxford’s listings came as something of a surprise to me. While Testament may not have the same cred as the “Big Four”, they’re considered by their fans as the fifth member of that famous club, and their presence was far larger than the venue they were booked into. As far as I can tell, this is a mini warm-up tour for Testament, prior to a ‘proper’ circuit of the UK, and it’s a privilege to see a band put on a show as good as this.

Supporting Testament on their brief return to the UK were Broken Teeth and Savage Messiah. Broken Teeth are a hardcore band from Manchester whose music is angry, tinged with anarchy, and really quite dumb. It’s hardcore with all the tropes in the right places, mixing up-tempo punk with slow crushing sections. Metal is juvenile at the best of times but Broken Teeth reminds me of the kind of band you form with your mates while you’re still at school and pent-up with anti-establishment sentiment.

London’s Savage Messiah are a far more enjoyable proposition. They play old-school-styled power thrash, like a mix of Testament or even Exodus, with NWOBHM like Judas Priest and Iron Maiden. They bring almost nothing new to the genre and despite being essentially a parody band, man, are they fun to watch. Powerful riffs, glorious guitar solos, fist-pumping choruses, this is a band to be enjoyed live. They clearly know how to play and it’s a bit of a shame that they’re content on mimicking their heroes – I’d love to see the results of them coming up with something fresher.

While seeing Testament play is a treat in and of itself, I’ll confess there’s something else that drew me to the O2 Academy on Sunday evening: Gene Hoglan. If you’re not aware, Gene “The Atomic Clock” Hoglan was, originally, the drummer for Dark Angel, but I know him better as the drummer for Strapping Young Lad and Devin Townsend. Hevy Devy is something of a musical hero of mine, and by extension, so is Gene Hoglan. I’m also a drummer and watching Gene Hoglan’s effortless performance is enviable – he plays with the exactness of a drum machine and barely seems to break a sweat. The musicians that make up the rest of Testament are similarly outstanding and I’m especially fond of Steve DiGiorgio’s fretless bass playing – he too shows nigh-on perfect technique. I can’t call myself a devout Testament fan – I’ve enjoyed their music in the past, but it isn’t music I’d naturally seek out. The crowd in Oxford couldn’t have been further from this point of view. With no coaxing, the crowd participated throughout, with shouts of “into the pit!” and “rise up!” showing how much people love Testament, who performed fan favourites from throughout their entire catalogue.

Testament were absolutely outstanding, captivating from start to finish, and their experience really shone through in their performance. Testament’s debut, The Legacy, was released 28 years ago in 1987. Watching a member of the “Big Four” perform live these days – oh, let’s say Metallica – can be, in my opinion, massively disappointing. The energy’s gone and something key is missing. While watching Testament, that thought didn’t once cross my mind. They’ve still got it. Come back soon.