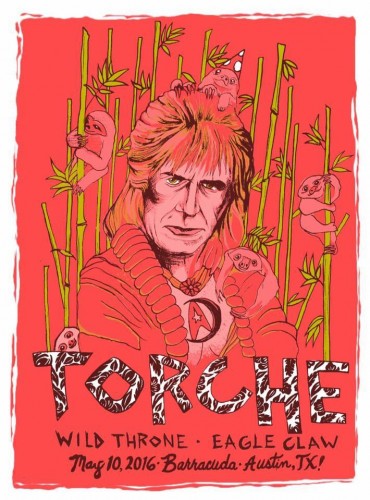 Between the three acts of the night there was a unifying thread of tomfoolery and self stokedness. Although the styles of each band varied, their overall presence and personalities diminished any pretension with jokes and good banter. Just getting it out of the way, but the party vibes at this show were abundant and aggressive. It appeared that 98% of this venue was wasted. The rowdiness progressed throughout the night into a bro-dodging dance to avoid spilled beers and falling grown ass adults. One thing I really admire about Torche is that they are the kind of band that draws out a lot of different types of audience members to their shows; this was no exception.

Eagle Claw kicked things off with their instrumental metal. The guitar player danced his fingers up and down the frets with a graceful ease that was kind of hypnotic. Eagle Claw’s set felt at times mathematical and nerdy, in a good way. From the start these Austin favorites had full enthusiasm from the crowd offering up some solid Sword inspired stylings.

I really had no idea what to expect of Wild Throne. I hadn’t had a chance to give them a listen and decided to roll with that mystery. What preceded was a frenetic sonic onslaught.  At moments they seemed to be singing to resurrect the ghost of At The Drive In. The singer was possessed and shrill and whether or not you enjoyed their set, it would be hard to look away. Their set was exciting and kind of polarizing. The lighting flashed fast and unmercilessly,  mirroring the pulse of this band. There were some really impressive moments in their songs that moved and morphed into a different beast as quickly as they appeared.

Torche came out with a satisfyingly long and well rounded set. The response they got walking out alerted them that everyone was more than ready. They ran through varied song list, bringing ‘Grenades’ out third to a roar. Steve amused everyone with his commands to create a “Rectangular moshpit” and birthday shout outs. Despite some minor sound setbacks for a few songs, Torche really rolled with the punches. It’s rare to find a band that is a heavy and elevated representation of their genre, let alone one that is also accessible and full of joy. I look forward to seeing these guys again.