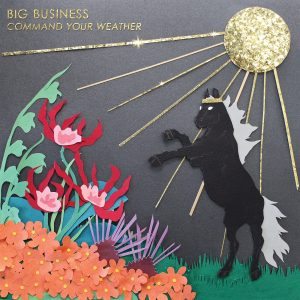 Big Business‘ Jared Warren and Coady Willis are two of rock music’s great Lifers. Before joining forces in 2004 they’d already been in two of the 90’s most underrated bands in KARP and the Murder City Devils. One great band a piece would be a pretty good innings for most musicians, but they weren’t content. Instead they teamed up and spent the next decade releasing consistently excellent heavy riff based rock that eludes easy categorisation. Not aggressive enough for metal, too smart for stoner and too wry and merry for doom none of the labels they’ve been asked to wear have ever quite fit. They’ve always been in their own niche.

And being out on your own rarely makes for an easy ride. Since their debut long player Head for the Shallows in 2005 they’ve been buffeted around by industry turbulence, ricocheting from label to label, eventually forming their own imprint Gold Metal Records for their last release, 2013’s Battlefield’s Forever. Aside for the core pair they’ve had an ever shifting line-up, picking up guitarists along the way until they briefly swelled up to a ‘power quartet’, only to shrink back down to a duo for this record after an apparently acrimonious split with guitarist Scott Martin. You might think that finding themselves pretty much back to square one after all of that they’d sound tired, maybe even dejected for their 5th outing, the first of their second decade.

If you did you’d be wrong.

Instead, as all Lifers must, they’ve dusted themselves off, levelled up a few new tricks and got down to the business of recording another fine record. In the circumstances you might expect Command Your Weather to be a something of a return to their roots. But while there’s plenty of the busy, abrasive down tuned riffs of their early work in play it’s a more complex affair than all that. They’ve introduced a layer of eerie melody with the addition of blossom bells to the percussion and applied some kind of pedal voodoo to the bass, making it sound like a creepy broken organ tumbling down a flight of stairs. Which might sound like a hideous combo on paper but Big Business have always been adept at somehow turning dissonance into off-kilter hooks. A song like ‘Father’s Day’ may sway with a queasy urgency, like a rickety old rollercoaster that’s clearly moving faster than it was built for, but it still makes a weird sort of sense in action.

They may have fewer hands on deck than on their last few albums, but the space vacated by the temporary players is filled with maximal thunderous drum work and fevered riffage. They may balk at the term ‘sludge’ when applied to them, seeing it as a descriptor of slower, more doomy sounds than theirs, but there’s a certain undeniable murkiness to their racket. Warren’s anthemic bellowing is as powerful and melodious as ever, and there are plenty of deceptively lush harmonies – particularly during the woozy mid-paced ‘Public Demand’ with it’s disarmingly pretty backing vocals – but sometimes they struggle to raise themselves above the maelstrom. You only really get to appreciate how good they are with a melody on a quiet outlier like ‘Send Help’. The blossom bells ring like an uneasy dream whilst a bizarre yet catchy wobbly bass/organ line washes over them, accompanying some of the best harmonies they’ve ever done. It’s a strange sound, like a transmission from another dimension where Crosby, Stills and The Melvins is a thing. It’s an oddity in their catalogue, a little like the unhinged power ballad ‘Lonely Lyle’ from Battlefields Forever; a showcase for another side of the band which could perhaps do with seeing the light more often.

Not that there’s much wrong with Big Business As Usual. Ragers like ‘Regulars’ and ‘Diagnostic Front’ hark back to their earlier, scrappier days, packed with cavernous grooves and drums that roll like charging cavalry, but with a complexity that will give you a headache if you stop to try and break down what’s happening. “They sound huge for a 2 piece!” has been a redundant statement since back when Warren was busy perforating eardrums in KARP, but you still can’t help but take a moment to admire the cathedral of ungodly noise they create between the two of them.

There’s a second quieter moment in the closer ‘Horses’, featuring more unsettling bell and bass interplay before it builds to a crescendo of crashing chords and cymbals. The album then ends as it begins, with the tinkling of blossom bells, and you can’t help but feel as if after all they’ve been through there’s still more up their sleeves than they’re letting on. To keep creating such consistently majestic noise as this is something beautiful. But to do that and still have potential yet to unravel – that’s something special indeed.