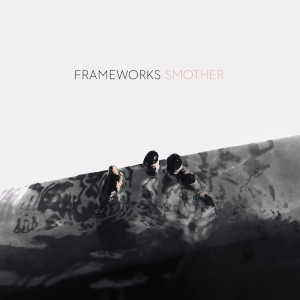 Florida based band Frameworks came to my attention later than I wish they had. The band’s tightly performed strain of melodic hardcore is a sound they have honed in a very short time; the release of 2014’s Loom through Topshelf Records saw the band showcasing a raw and hard-hitting string of tracks fuelled by an emotional urgency that was wholly gripping. Framework’s influences are worn on their sleeve and stand somewhere between 1990’s Ebullition Records output and current peers such as Touché Amore and Modern Life is War, yet there is no doubt with their expansive atmospheres and pummelling crescendos that the band have created something totally their own. This was especially clear on this years’ Time Spent EP, which included 2 beautifully composed bursts of emotionally charged melodic hardcore whilst introducing far darker tones and richer instrumentation that relished in post-rock elements. This EP served as an excellent example of what Frameworks would then set out to accomplish on their sophomore release, Smother.

The record introduces itself as produced and mixed perfectly for the band’s sound, the layers of driving guitars and lead melodies fit seamlessly. The opener, ‘Fear of Missing Out’ lays bare the sharper edge to the album, which will later entwine with the consistent emotional force behind each and every track, and above all displays Frameworks’ growth into a far more compositionally and structured band. Take the layers of guitar melodies on the opener and the title track for example; they are emotionally gripping as they are soaring and expansive, weaved into the progression of the tracks effortlessly. This is what essentially makes this album stand out; the ability to write cohesive, hard hitting songs that show the bands maturity at this stage, whilst also injecting the level of emotion that compliments the genre to a degree that doesn’t lose the grit.

This punchier aspect is best achieved during shorter cuts such as ‘Song of Myself’, ‘Tinnitus’ and ‘Trite’, all tracks that hold the hardcore influence up high as the band delivers pounding drum passage after another with the aid of the winding, crunching guitars and Luke Pate’s throat ripping vocals. Tracks like these emphasize the theme of tension that oozes from the album; a feeling of frantic emotion bursting at the seams. The highest points of Smother come in the form of tracks that perfectly embody this balance between heavy and uncompromising to sentimental and alluring. ‘Peculiar People’ and ‘Tangled’ are beautiful tracks because of this; the stunning guitar melodies and crescendos are so memorable that their impact is hard to shake off. ‘Purge’ is a track that will stay and haunt a listener; its beautiful melodic introduction bursts into a building chorus that brings a lump to the throat. It’s almost unsettling in its emotional draw, maybe the dispirited and stunning Max Moore directed video adds to this notion.

Down to the repeated lyric passage in the closing moments of ‘The New Narcissistic American Dream’, every moment of this album is extremely engaging. Frameworks have perfected the sound they were going for in their early releases, and as a result have produced a collection of tight, incredibly well written tracks that honour the genre of melodic hardcore, post-hardcore and wherever else they draw influence. Above all the album sticks, and I expect it will hold a high place in the round up for this year’s releases. Smother is a beautiful and cohesive record that is more than worth your time.