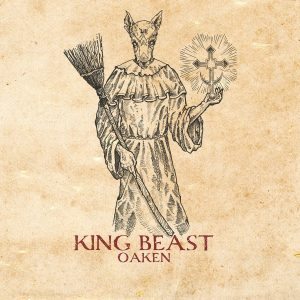 To most people in the know concerning hardcore/punk songs, they’re expected to be short of life and breath. Much like many of the bands that encompass the genre. Oh sure, there’s an on-going feeling of true comradery with the music, but anyone that has spent any more than a year in the scene has seen a hundred bands come and go and reform with other members of other bands. I’m stretching this out a bit, I’m sorry, but the fact that Budapest, Hungary’s Oaken can craft songs of such immersion and yet remain so firmly in the hardcore spectrum is something not many bands can pull off.

Oaken’s got a lot on their plate and even more going for them. In a genre so saturated by ADHD tendencies you’d think that they’d go largely unlooked. And to be fair, hardcore/punk is a pretty tightly knit crowd. When a band makes waves they don’t go unnoticed. Oaken has the potential to go this route though it’s surprising that their third LP King Beast hasn’t reached that mark. But maybe it’s because it’s not something that the community is all that familiar with.

Oaken are not the type of band to be regarded lightly. The quintet is heavy on experimentation and mood above aggression. King Beast shows that the band has more than just some heavy riffs, rough vocals and severe breakdowns. And it manages to do all this in just four tracks in one of the most intense, nauseating and heavy experiences. See, King Beast acts more like an animal than a declaration or dedication to any genre. Sure the band is rooted in progressive/melodic hardcore/punk, but it’s their experimentation that makes them out to be more of a Catharsis than a Fucked Up iteration.

Catharsis may be the best comparison that I can come up with concerning Oaken. And yet they don’t really sound like them at all. But they produce a similar vibe. Something that’s always unsettling, gorgeous or creepy. Kind Beast wears a lot of different masks throughout its thirty-seven-minute trek. At one moment the band can be conjuring up a beautiful guitar progression and then a few seconds later they’re aggressively in your face. Take ‘The Hyena’ for instance: the track is at once melodic, even relaxing. Then it picks up, it goes after you. But then it stops and floats back down and the singing kicks in. It comes off unexpectedly. But it culminates into something greater; it’s absorbing and endlessly interesting to listen to.

Where Oaken is more like a Catharsis album is in how poetic the whole thing feels. Catharsis was a band that…maybe came off as pretentious to some, but always crafted an engulfing experience. Though also associate with the Holy Terror movement, Oaken don’t tread that path. The band plays more to drone and melody than it does to speed. Though they dabble in old school occasionally, the band is more definitively modern. Oaken pay their dues like most bands of the genre do but they’re far more progressive in approach. ‘Damnatio Memoriae’ is the kind of song that remains carnivorous but isn’t afraid to turn off the distortion to get ominous.

King Beast is a fitting album name as this album is seriously bestial. Sure there’s moments of safety littered throughout, but not enough to make the listener let down his/her defences. Oaken is like the best parts of Catharsis and Starkweather combined. This is the kind of album you wanna sit down with in a dark room and simply experience. It’s not an onslaught of adrenaline, but more of a slaughter of the senses and soul.