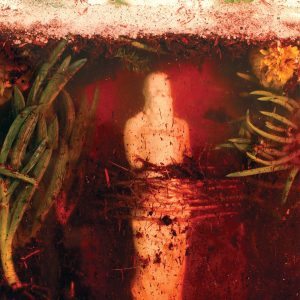 Mercurial is a good place to start with Wreck and Reference’s newest album Indifferent Rivers Romance End – insofar as it’s an easy grab for a word to describe an album that is even harder to pin down within tidy parameters than the band’s previous albums. This latest album seems to shift out of context the further you examine it, embodying its core theme of change while also sounding more concrete than the previous album Want. The songs here are more fragile and more muscular all at once and each seems concretely tied to the influence the Greek philosopher Heraclitus – shown here as a drowned statue on the album’s artwork – who believed the entirety of the cosmos to be an “ever-living fire.” Flame is constant only in that it is constantly changing, similar not only to this collection of tracks but to Wreck andReference’s trajectory since its inception.

All heady philosophy aside, though, this album is also very immediate. Immediately engaging in its melodies and broader palette of tones and genres, immediate in its technical prowess and certainly immediate in its lyrics which manage to be both poetic and unsentimental. No strangers to the void, here the band has managed to make its vision of the abyss prettier than it ever has without losing any of the bite and aggression that allows popularity in metal and extreme music circles as well as crossover fans of anything else from goth (however that genre might exist in contemporary context) to dance music andany other genre tag that can avoid going near the (maybe applicable but nearly meaningless) word “indie.”

In tracks like ‘Manifestos’, the band reaches chiming heights that are bracingly mournful while exploring lush corners of melody that reward the listener again and again, reaching a feverish climax complete with a crushing string arrangement. The performances here from duo Felix Skinner and Ignat Frege – vocalist/sampler/keyboardist and drummer, respectively – blend a technical precision that brings the listener closer to the material rather than distancing them. Even while Frege’s percussion has an edge of flash to it, it still sounds stripped down and essential. Skinner explores each dark corner while using his scorched shriek and pained murmur to equally intense effect.

Another album highlight ‘Languish’, one of the more outright aggressive tracks, still swells in and out so that its most punishing moments crush even harder – all while still maintaining a perverted romanticism through the synths and string samples. It too echoes the writings of Heraclitus as it seems to deepen and ascend at once – two seemingly opposite states that Heraclitus viewed as the same journey. That sound, or feeling, is the cipher of the listening experience. The constant state of change is essential to each piece – a nearly perfect execution of philosophical ideas through musical composition. All of this is done without distracting the listener from what is in its most simple form just a deeply satisfying listen.

Wreck and Reference has always seemed interested in shifting and challenging perceptions – or has at least just always been good at it. With Indifferent Rivers Romance End, the band has been able to marry that iconoclastic edge to rich and resonant material. The album beautifies heartbreak and hopelessness which in turn makes them both liveable afflictions. This in itself is a classic echo of the cosmic flame – constant, changing and in plural states at all times.