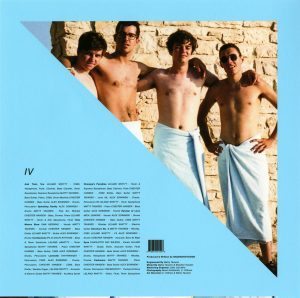 Released on July 8, 2016 via Innovative Leisure

BADBADNOTGOOD are a Jazz Quartet hailing from Toronto and have enjoyed a steady rise of success and critical acclaim since they released their debut album in 2011. Gaining an impressive following from fans and musicians alike the band has gone from strength to strength. 2015’s Sour Soul, a collaborative piece with Wu-Tang member Ghostface Killah, was something fresh and exciting within the Hip Hop world, with both acts proving their worth and not a dud on the album.

BBNG have always been tagged within the instrumental hip hop category that critics are fond of using, and it is not difficult to see why, considering their involvement with the for mentioned Ghostface Killah, as well as Earl Sweatshirt and Tyler, The Creator. However it has always been their instrumentals in which they sounded their best, when the group is free to push themselves musically, burying the listener within heavy grooves and a sound that is ultimately rooted in jazz.

On the latest release Chester Hansen, Alexander Sowinski and Matthew Tavares, the original BBNG members, have officially introduced saxophonist Leland Whitty into the full time line up, and for me this makes all the difference. Listening to the groups previous releases, tracks featuring Whitty are the ones that stand out. The presence of a saxophone produces a rawer sound, a deeper and sometimes aggressive addition to the collective. Several of the songs on ‘IV’ are driven by an individual within the group, with Sowinski’s drums providing the backbone of ‘Speaking Gently’ and Hansen’s bass creating the undulating groove of the title track ‘IV’. However for me it is Whitty’s addition, in one moment smooth and the next screaming with the spirit and anger that only a saxophone can produce, that makes this album a real step for the group. You only have to listen to the roaring lines on the opener ‘And That, Too’ and you know this isn’t a normal BBNG album. It only gets better on the track ‘Confessions Pt II’ with guest saxophonist Colin Stetson who’s furious playing creates one of the albums stand out pieces.

This is the first of the groups own albums to feature guest vocalists and it is a welcome addition. The album uses the guest vocalists sparingly enough to achieve a rich and varied piece throughout. It is often the downfall of electronic musicians who produce an album with their beats and a different guest artist on each track, disrupting the flow of the album as a whole, even when the tracks singularly are very good. This is not the case on ‘IV’ with only 3 vocal tracks spaced apart that work as a nice interlude between the instrumentals, particularly ‘Hyssop of Love’ which features Chicago rapper Mick Jenkins.

This album is an outstanding addition to the group’s discography and seems to show a new stage in BBNG’s creative process. At its bones this is a jazz album; it is an exciting, passionate and progressive sound within modern jazz and the addition of guest vocalists means that it has an accessibility that is often lacking in jazz music. Continuing to perfect their sound BBNG has created an album that improves listen after listen. Progressing from being an instrumental hip hop band to a fully formed Jazz Quartet BBNG has cemented themselves as one of the most forward thinking and expressive Jazz collectives around today and I cannot wait to hear what comes next.