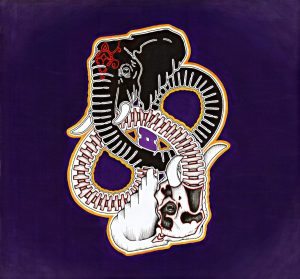 Released on January 5, 2015 via Luova Records

After all Facebook recent posts of love to Scandinavian football (Huh for Iceland) have come down, I want to take up an older but well trodden topic, Scandinavian heavy music.  Huminoita is the new name which is worth attention. Hailing from Finland, they describe themselves as 5-piece band which likes to invite extra guests at live jams with walls of sound and wind instruments. Huminoita would especially appeal to those who are ok with mixtures of genre layers. They are really good in making an aesthetic and beautiful mixture of prog grandeur with sudden jazz elements.

What we received from Huminoita at E&D is sophomore album All Is Two, which is pretty much flawless to my listener’s ear; both in industries terms (though who the hell cares about these conceptions)  and by sound it is a complete and fascinating longplay.

I have no ideas about the cover art only except of that it is vivid as well as the music. 2 elephants linked together like Yin Yang symbol are in ink tattoo style. Maybe it shows the link between the past human experiences and present or something else related – this is left for listener’s mind and imagination, but no doubt visually captivating.

This work is best heard all at once. Huminoita’s music is very smooth. Starting with one chord and simple drumbeat, ‘The Sherriff’ catches you with old cool guitar solos and lyrical trumpet. ‘Goliath’ captivates with heavy strings once, but gives a state of trance with vocalizations. This is a peculiar melody which can be compared to early 65daysofstatic music by structure of the track and by mass effect.

Next song ‘The Pilgrim’ is completely different story told in the moods of Led Zepp. It is greatly told by harmony of strings and winds effects and synth ending. That combination is the high point on the album; I think this track describes the band perfectly.

The closest allusions I would raise in context of Huminoita sound is GYBE’s psychedelia, so vividly coming to mind when ‘King of the Hearts’ is on, a 9 minutes long musical river. Still instead of aggressiveness and anxious sound Huminoita captures with beautiful orchestration leaving you in a blissful state.