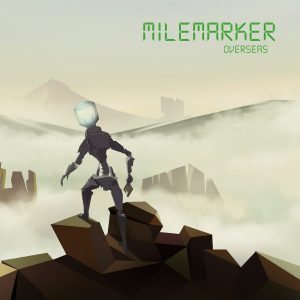 The last few years have seen a resurgence of reunions from bands who were either under-the-radar or fringe-mainstream back in the ‘90s and early 2000’s. The rise of social media has undoubtedly played a considerable part in this trend. Despite all the inane memes masquerading as disseminators of truth, and the hateful pits of despair that can be found in any random comments section, the opportunity for bands to reconnect with their fan bases and subsequently gain a true understanding of their own persisting viability is beautiful thing indeed. This has resulted in some triumphant comebacks (American Football, Failure and Mineral come immediately to mind), and others that have yielded questionable returns – as much as I live for At The Drive In’s music, I can’t deny wishing they had just left it all on the shelf back in 2000. What all those artists have in common is at least one undeniably beloved record that has only gained in legend as the years have gone on.

Milemarker is a different, and therefore strangely intriguing case. The Chapel Hill, NC-originated synth-punk band released one very good album, 2000’s Frigid Forms Sell You Warmth, and material on either side of that record that doesn’t exactly bear the kind of legacy that would leave one thinking of a prospective reunion as a no-brainer. Their 1998 album Future Isms shows potential but doesn’t entirely connect. I remember checking out 2001’s Anaesthetic back when it came out and finding it to be fairly plodding and mostly free of any memorable hooks. They made a minor impact, but if I’m being honest, I wasn’t even aware of 2002’s Satanic Versus or 2005’s Onimosity until I began researching for this review. You may be reading this as a Milemarker fan and thinking “well, why the hell are you reviewing Overseas then?” That’s a fair question, but I suspect my past experience with Milemarker is more representative of the norm for 2000’s post-punk kids, so hopefully as a result I am possessed of the kind of everyman objectivity that a diehard fan might not have.

On the whole, history seems to view them as a solid band with one album in particular that really stuck out, which is likely why Frigid Forms Sell You Warmth is the only record being re-released by Lovitt in conjunction with the debut of Overseas. That being said, I think it plays in the band’s favor. Free of the crushing weight of expectation that faces a band like At The Drive In, Milemarker has been able to quietly pick up where they left off (albeit with a new synth player and a new drummer) and make exactly the album they wanted to make. And you know what? Overseas is a damn good record that stands as its own thing in 2016, rather than a “reunion album” haunted by fan nostalgia or the artists’ past selves.

Overseas kicks off properly with the wryly-titled ‘Conditional Love’, a groove-laden track with distorted, robotic-sounding verse vocals that come off surprisingly well and lead into an infectious chorus. It wastes no time setting a vibrant tone, making it clear that not only is this no half-hearted effort to ride the coattails of former glory, but that Milemarker has in fact made some significant upgrades to their synth-punk game. No doubt the influence of producer Greg Norman (Godspeed You! Black Emperor, Russian Circles) comes through strongly in the mix, particularly on ‘Untamed Ocean’, with its driving drum beat and killer guitar melody, which establish a frantic energy usually reserved for bands in their early years. With this song, the band has penned something that should be considered a new classic by their fans, a feat not easily accomplished by artists releasing their first material in over a decade.

‘Carrboro’ is a fun, danceable tune that bears comparison to Minus the Bear’s recent work, while the following track, ‘The Dreamer’ has a more sinister vibe, providing a darkness which acts as an effective counterbalance to the airiness of what comes before. Clocking in at under two minutes, ‘Blue Flag’ is a brief but catchy bit of post-punk that leads nicely into the second half of Overseas. ‘Luxuria’ demonstrates everything Milemarker does well in a single space. Muscular grooves, atmospheric synth, effects-drenched, melodic guitar work and a memorable chorus combine to form another high-level winner of a track.

The album occasionally threatens to lose steam during its final third, especially during a couple of dull verse sections, but picks itself up nicely with another great chorus in ‘Recognition’, the up-tempo instrumental jamming of ‘Uh Ah’, and the rock-solid second half of ‘Supercomputer’. I wouldn’t go as far as to say that Overseas is a consistently fantastic record, but even in its lesser moments it still comes through as an enjoyable piece of work.

At its best, though, it ranks amongst the band’s finest efforts. It’s fair to say that the world may not have been ablaze with anticipation for new Milemarker, as it is currently for the second American Football LP. However, against the odds, Overseas proves to be one of the most satisfying post-punk releases of the year to date. More importantly, it is a record that suggests a promising new beginning rather than simply an attempt to give old fans one more go-round. Nostalgia be damned, Overseas exists for 2016 and beyond, and vibrantly so.