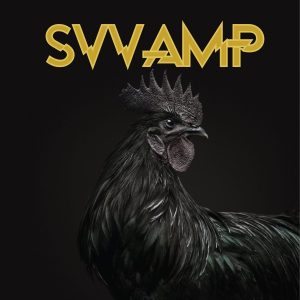 Released on August 19, 2016 via RidingEasy Records

With their self-titled debut album, Svvamp have produced a sound that could slide straight in with the classic rock acts of the mid-70s. This is a vintage sound that still sounds good, and for those that enjoy that era of rock music it is perfect.

Svvamp are a Swedish trio made up of Henrik Bjorklund, Adam Johansson and Erik Stahlgren. These guys who know what they like and this comes through in their debut album, mixing a rich blend of rock, blues and folk, Svvamp have made a very good go at recreating a sound that has been swaggering around since the 60s. This is a popular sound to reproduce and since its origins, many acts throughout the decades have made successful careers of this pastiche. Many of these bands take these very obvious influences and repackage them so that they contain new elements, ready to unleash on a new generation who maybe haven’t heard Cream or even Led Zeppelin yet.

However on Svvamp’s debut it is just nice to listen to a record that knows exactly what it is trying to be. Sometimes it is good to know exactly what you are getting. There are no huge surprises on this album, no deeper undertones or messages and no political agenda; these are three friends making a record for the sheer fun of making a record, and this works in the bands favour, because they clearly put a lot of love and pride into what they are doing.

The first singles of the record are a good taster of what to expect from the piece as a whole. ‘Burning Down’ is a bass driven beauty with wobbly guitars and distorted vocals producing a blustering, bleary-eyed, balls to the wall rock song that sounds as good today as it did in ’69. The second single ‘Oh, Girl’ works the same formula, heavy riffs and guitar solos layered with whispy distorted lyrics, however for me it is the folk infused tracks on this album that stand out as the highlights.

Both ‘Big Rest’ and ‘Set My Foot and Leave’ are the album at its best. These are the slower pieces, but also the most soulful. These tracks work smartly, cutting a gentle break within the heavier songs that make up the lion’s share of the album. These tracks are also the most interesting lyrically, with most of the other songs following a very familiar pattern. ‘Set My Foot and Leave’ is the most poignant track, and is a little sweet ditty of a folk-rock song that could have jumped straight out of the ‘60s making it the stand out of the album.

If you are a fan of mid 60s to late 70s classic rock then you would be hard pressed not to like this album. Svvamp sound like they had a lot of fun making this album and I think most listeners would have fun listening to it too.