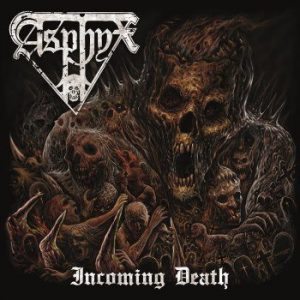 Asphyx’s last album, 2012’s Deathhammer, justifiably received a ton of positive press and a few critics even said it was the pinnacle of what the band could achieve. Fans have waited four long years since that massive release. The band swapped out some of its foundational soul with drummer Bob Bagchus and found a capable replacement with Stefan “Husky“ Hüskens.

So Asphyx’s new release Incoming Death will be highly scrutinized by fans and the metal community at large. In my opinion, there are few death metal bands left that carry the torch for the original death metal sound that consistently produce high quality music like Asphyx does. I was pleased to hear that Incoming Death will be another sharp studded notch in the band’s influential and impressive discography.

The Dutch meath metal legends return in full Asphyx form at slow, mid and high tempos on Incoming Death. The band’s thunderous, stabbing sound is punctuated by the distinctive vocal howl of Martin van Drunen. His vocal delivery is as pained and ugly as possible while being mostly comprehensible. Martin van Drunen often does an arresting, unsettling and gruesome howl that sounds like an ancient werewolf with a long history of excessive imbibing in Jack Old Number 7. It is an unparalleled delivery and unquestionably one the defining characters of the band’s sound.

The band goes straight for the throat with the opening track ‘Candiru’ named after the “blood sucking fish!”. It is hard hitting, fast and heavy. The driving beat immediately showcases new drummer “Husky” Hüskens’s dexterity and his emphatic contributions resonate throughout the album. What impresses me about Asphyx is their ability to blend these crushing dark, deep tones of doom and death metal while routinely incorporating strong melodies, catchy time changes and thunderous instrumental fragments. For me this is the strongest sonic marriage and this album strikingly exemplifies this.

The symbolism on Incoming Death often touches on war and the frantic, often chaotic tones on the album create these ominous atmospheres quite vividly. Tracks like the unrelenting ‘It Came From The Skies’ and the two minute bombast ‘Incoming Death’ will have panicked eyes staring skyward for potential destruction. These breakneck paced tracks will likely go over well live to create raging seas of humanity, but Asphyx also show great quality when the pace slows down.

The more doom flavoured tracks still have the grim Asphyx vibe, but offer the ear something a little different. ‘The Great Denial’ lunges forward slowly, opening with spartan drums that allow the power of Paul Baayens’ sinister guitar melody and ominous vocal inflections to surface in the track. The essence of metal seems to be present as this track unfolds with its enchanting, soaring presence. The song concludes, momentarily lifting the foot off the pedal with a rousing acoustic outro.

On Incoming Death Martin says. “I think we are the only ones that can and are able to deliver a monster like this. And as always, if we like it, we know our fans will like it too”. I agree. There is plenty to like about this release. The spirit of Asphyx seems alive and strong for the duration of the album. Asphyx take the listener on a multi-paced, infernal journey through hellish war imagery and shell-shocked atmospherics. Thick slabs of commanding doom and death metal paint a blackened but melodic palette on the album. Incoming Death is a ferocious and factious release that is equally sonically satisfying and always permeates deeply like good metal should.

P.S. Thank you to U.S. metal magazine Decibel that seems to be responsible for kickstarting Asphyx’s creative process.
.