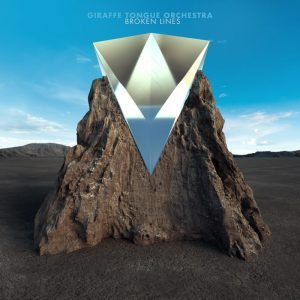 When (former) members of The Mars Volta, The Dillinger Escape Plan, Alice In Chains and Mastodon come together and flex their proverbial creative muscle in a single project it’s bound to catch everyone’s attention. With such a pedigree expectations for Giraffe Tongue Orchestra are almost boundless. Let’s see whether their debut album, entitled Broken Lines, lives up to its potential.

Broken Lines is the perfect title for an album that’s all about genre bending and a group of musicians that has a cavalier attitude towards musical boundaries. A clear example of this are ‘Everyone Gets Everything They Really Want’ and ‘Blood Moon’, two songs which draw influences from funk, disco, jazz and good chunk of prog rock. Album opener ‘Adapt Or Die’ is a straight up punk rock track, which sees singer William DuVall reconnecting with his musical past and features some gnarly guitar solos work by Ben Weinman and Brent Hinds from The Dillinger Escape Plan and Mastodon, respectively.

The band ventures into prog country on ‘Crucifixion’, ‘Thieves And Whores’ and ‘Back To The Light’, but fortunately they refrain from the typical prog cliches likes endless noodling and technical powerplay for just the sake of it. If anything, it’s prog in the same vein as The Mars Volta on Octahedron and Mastodon’s Crack The Skye with the acute sense for songwriting of latter day The Dillinger Escape Plan. A special mention should go to former The Mars Volta drummer Thomas Pridgen. His tasteful and versatile drumming adds a whole new dimension to this album.

Of course, one can hear snippets of the aforementioned bands shimmering through on Broken Lines. Having that said, Giraffe Tongue Orchestra has enough staying power and and its own distinctive identity. This prevents it from becoming another tepid so-called supergroup affair like the latest releases by Gone Is Gone and Killer Be Killed.

Given its inherent eclectic and quirky nature Broken Lines is surprisingly cohesive. The song material is imaginative and daring as one would expect from such high calibre musicians. It beckons the thought which musical heights Giraffe Tongue Orchestra might reach on possible future releases. Definitely one the finest debut releases of this year.