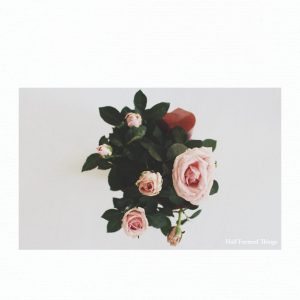 Released on September 2, 2016 via Bastion Records

Half Formed Things is a pretty misleading band name. It gives the impression of unfinished or unpolished work and what the band has delivered on their debut EP is anything but. Instead they play a well crafted, well played and organic sounding kind of artsy pop music that is both easily listenable and musically interesting.

Built around a stripped down line up of guitar, piano and drums Half Formed Things manages to have a remarkably full sound. While all of the instrumental performances compliment each other really well what really gives the music its evocative power is the vocal interplay and harmonies. The interplay between instruments and voices is especially fantastic in the slow building ‘The Tower’ the climax of which is simultaneously noisey, thundering and beautifully delicate.

The EP was recorded in a variety of locations by the band members themselves and the production quality speaks to their abilities and the love they have for the music. It’s very refreshing to hear a band that sounds like a band playing in a room together. You get the sense of fingers on a keys and strings and can almost feel the air in the room. The clarity of the instruments and voices throughout the entire EP is fantastic. The drums in particular sound rich and natural, not to mention the busy yet tasteful drum arrangements.

The only drawback of this EP is that it’s only an EP. After the three songs are over I definitely want to hear more from them and hope they record a full length soon. I also hope they continue with the DIY method of production because it works really well for them and it gives this the songs a personal touch and sense of love and care that is often missing from recordings these days. All in all this is an excellent debut EP and I can’t wait to see how this relatively young band develops.