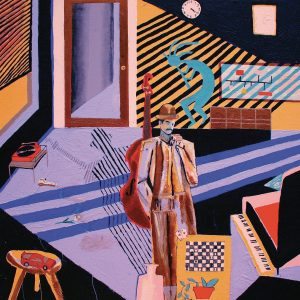 Breaking away from the ties of being best known as Mac Demarco’s band mate, Alex Brettin’s Mild High Club have made a glistening and smooth psychedelic pop album, a near perfect summer record that really is a pleasure to listen to.

Released on Stones Throw Records, Mild High Club’s newest release Skiptracing sees the group find their own distinct style within the scene of low-fi crooners that are very popular at the moment, which includes Mac Demarco, the sweetheart of 70s inspired smooth pop, and who Brettin used to tour with. Finding his own sound, Brettin has produced a record clearly his own, more confident and more diverse than the groups debut ‘Timeline’.

There is definitely a distinct sound that runs through the record, a mosaic of smooth psychedelic pop, twinkling guitars and smooth synths. It is the music equivalent of a mojito by the pool, a warm and hazy collection of songs that express the aesthetic that the band are trying to achieve, yet still shows of the skilled musicianship of the players.

The album opens with the track ‘Skiptracing’, a beautiful sparkling pop song with a slight psyche tinge, distorted vocals and a great cowbell that rides through the track. ‘Homage’ continues this theme , following nicely to ‘Carry me back’ where wavy guitar pulls the listener through a slower meandering track, layered in beautiful synths and melancholy drums, it sounds like saying goodbye to your holiday sweetheart.

The following tracks change the pace of the album slightly, making the second half more unpredictable, and for me more enjoyable. ‘Tesselation’ is a funk fuelled gem, pushed along by hip-hop snares and is a stand out song. The instrumental ‘¿Whodunit?’, is an interesting change, an almost droning free jazz piece with heavy drums and synths. I think more of these exploratory tracks would have worked to make the album as a whole more engaging, however for a record that has a distinct mood it does contain enough variation between songs to prevent it from getting stale.

The album follows a familiar pattern, laid back hazy grooves are layered with distorted vocals, merging psych, smooth jazz and 70s soft rock to produce a record that is genuinely enjoyable to listen to. The instrumentals on the album work well to divide it up and also help to prevent the chill out-vibe from getting dull. The record shows that Brettin has developed his own style that is progressive and interesting in the world of indie pop and one that definitely sets him apart from his peers.