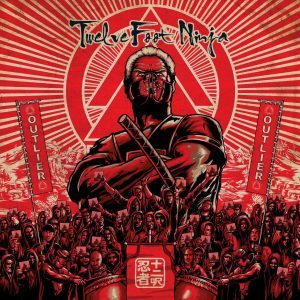 Released on September 16, 2016 via Volkanik Music

There is something to be said for consistency. How many times have you gotten something, liked it, went back to wherever you got it to get another, only to find it lacking whatever made it unique? This is especially true with food and/or customer service. That is why I tend to go back to certain places and/or order certain things because I know it is always going to be good.

Now, let’s think about that from a musical context. How many times have you gotten a band’s debut album, loved it, and then purchased their next album, only to be disappointed? The sophomore slump is real, and many a band have fell prey to it. This was my concern when I received the new Twelve Foot Ninja for review. I loved Silent Machine, and had been hungry for more ever since. I suppose I should not have been so hesitant, since they had released opening track ‘One Hand Killing’ last November, and it sounded like Twelve Foot Ninja would continue on their winning ways. But that was nine months ago, and a lot can happen in that time. Well, it turns out they were just taking their time. After a very successful Pledge Music campaign, which shows the dedication of their fan base, Outlier will be released September 16, 2016 on Volkanic Music.

‘One Hand Killing’ is the perfect opening track, as it picks up where they left off on Silent Machine. With the punch of a gong, it launches onto a chunky djent riff that persists until the funky bridge. Vocalist Kin Etik gives us a taste of what to expect on the rest of the album as he bounces from falsetto to roar. ‘Sick’ is of a similar build, asking the question “Are you sick of being tired? Are you tired of being sick?”.

Next is by far the catchiest track of the album, and the readiest to own any modern rock radio set, ‘Invincible’. You simply cannot get this one out of your head after you hear it. From here Twelve Foot Ninja start to branch out. The heavy bass runs, jazzy guitar licks, and muzak keyboards of ‘Oxygen’ show this band could be comfortable playing a packed club or an airport lounge. ‘Collateral’ may start with a whimper, but it ends in a roar, as it is one of the heaviest tracks of the record, and one of its most straightforward.

One thing about Twelve Foot Nunja I appreciate is their ability to blend different styles throughout their music. Whether it’s the flamenco guitar on ‘Post Mortem’ or the horns on ‘Point of You’, it always makes sense. Hell, they even go Bollywood on ‘Monsoon’ and it works. Even though the waltz of ‘Adios’ says “This is my last song for you”, ‘Dig for Bones’ is the closer. Switching from fat down-tuned riffs to quick rim shots, the 8-bit bridge is but a pause in the mosh.

Outlier is the best possible way Twelve Foot Ninja could have followed up Silent Machine. Outlier is thicker, fuller, and more diverse than Silent Machine without straying away from what got them to the dance. If this is what they bring to the table on the second album, I can’t wait to hear what’s next.