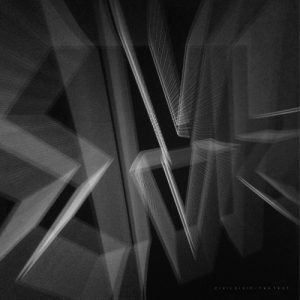 Electronic music has had a massive revival over the past decade, mainly due to the overproduced, stadium friendly new rave culture that is EDM. Whilst this global shift has resulted in a plethora of mainstream electronic acts, producers and DJs flooding our airwaves with their bass drops and bombastic synth melodies, there has been another wave of artists pushing the electronic music envelope in a completely different direction. One of those acts is Civil Civic. A post punk electronic instrumental duo consisting of two Australian expat musicians – Aaron Cupples, Benjamin Green and a third member simply known as ‘The Box’. Their 2012 debut album Rules meshed bass & lead guitars seamlessly with drum machines & synthesizers to great effect. Four years later they are back with their new LP The Test.

Many electronic acts focus on synthesizers and drum machines but Civil Civic also use their guitars to create entire atmospheres. This is evident on the album opener, ‘The Island’. Stops and starts of distorted static blast out discordantly before the deep bass troughs hurtle the track forward into another dimension whilst alien soundscapes coalesce before our very eyes, and this is only the first track.

I tend not to use the word epic but it is the only way to describe ‘The Mirror’. Glacial synths rise and fall over a steady bassline that Simon Gallup would be proud of, whilst brittle guitar lines make way for yawning chasms of digital feedback and we are actually in the future. At this point it is impossible to pigeonhole Civil Civic as their sound is a mixture of prog rock, ambient electronica, post punk and a whole lot of other genres as well. The infectious guitar lines of ‘The Hunt’ feel like a nod back to their previous album, Rules, but the solo slowly builds up until it is unleashed in one almighty crescendo of synths and you realise they have learnt a thing or two over the last four years.

When he was based in Melbourne, Green had a lot of experience in playing in a diverse range of bands and experimental outfits and this particularly shines through on ‘The Crush’ and ‘The Shift’, as they are driven by strong bass lines and Cupples’s guitar lends some nice touches of post-punk nostalgia. The synthesizers take more of a back seat on ‘The Shift’ and also on ‘The Gift’ – which is two and a half minutes of unadulterated pop. There are some hefty bass synths deployed for ‘The Slide’ and this is the only track on the album that comes anywhere close to rave and wouldn’t sound out of place at a warehouse party in the late eighties. Green and Cupples tease the cacophony out for over seven minutes, creating never ending bass drops with synth drones and it sounds like they are well and truly in their comfort zone.

Civil Civic have managed to create a record that defies genre stereotypes without compromising their own sound. The Test is a much more layered and polished album than Rules and ‘The Mirror’ in particular shows how far they have come in four years.