(((O))) Review: Daniel Thomas Freeman – The Infinite and the Unknowable 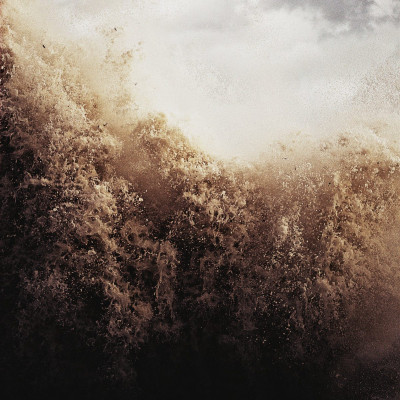 The Infinite and the Unknowable by Daniel Thomas Freeman

Six years in the making, the third album The Infinite and the Unknowable from Daniel Thomas Freeman is a dark cascading descent into the unknown abyss. An album that pulls you along slowly through the infinite ocean as the ripples echo off into the bleak foreboding reaches of existence.

Continuing on from his 2011 debut The Beauty Of Doubting Yourself and his unnerving and callous music score with Matthew Watson for the film ‘Catch Me Daddy’, The Infinite and the Unknowable (TIATU) feels perfectly submerged in the world of film and imagery. You could easily envision the camera slowly tracking through the smog-filled dystopian landscape of Andrei Tarkovsky’s ‘Stalker.’ Hauntingly roaming the mud and rain-soaked Kingdom of Arkanar from ‘Hard To Be A God’ or lingering from afar as a fire burns in the distance of the post apocalyptic ‘Time Of The Wolf’, it is in these images in which the music of TIATU feels so at home.

Accompanying TIATU is a 48-page book of poetry and beautiful yet violent high-contrast images of the unforgiving sea, which act as guiding buoys for the listener and are an essential companion to this mythical Ballardian sea voyage. The visceral photographs are reminiscent of the silent era of cinema and the works of Sergei Eisenstein and Eric Von Storheim. Along with the music, they are one and the same, perfectly interwoven fibres of weathered fishing rope being pulled mercilessly through the rough worn hands of the ship’s crew.

The album is layered with lingering synths and at times harsh violins that cut through you like the fictional sea voyage piercing the vast bleeding ocean. The ominous rumbling atop multiple electronic sounds of the opening track ‘The Infinite and the Unknowable’ slush back and forth like waves upon the shore, thereby setting the tone for the album as it patiently adds layer upon layer until the deep rumbling from the beastlike vessel guides you to the end.

Freeman credits the film ‘Under The Skin’ as an influence on the album and it is evident throughout. ‘Tears Of A Salt Land’ could seamlessly drift over Scarlett Johansson’s character The Female as she lures her prey into the reflecting opaque oily liquid. The introduction of the violin further evokes scenes of sultry sirens calling out from under the sea. Subtle changes and added violins continue to increase the presence of danger.

‘Beyond The Harbour Wall’ is a haunting aboriginal hymn of violin and painful animal cries from a forgotten world. It feels like a living mammal as the heavy industrial breathing draws you close to rest upon its weary chest.

The voyage suddenly takes a distressful turn as sounds begin to siphon through in reverse as the tapping of metal and violin form a beat. The constant ticking and cogs moving conjure images of the crew frantically scurrying around the deck in slow motion as the illuminating flare singes a pin hole in the night sky. ‘…And The Flare Gun Stars Go Up’ abruptly burns out much like the signalling flame of distress.

Through the next three tracks we get a change of tempo in the album as the story reaches its centre. ‘A Field Remembered’ plays out as a distant memory of halcyon days gone by. The song is a distinctive break in the dark brooding tones gone before. The guitar and violin dance perfectly together, reminiscent of Nick Cave and Warren Ellis’ ‘The Assassination of Jessie James By the Coward Robert Ford’ score. Though not necessarily an upbeat song it does offer a glimmer of hope, even if it’s just a nostalgic memory.

TIATU continues its patient solemn biblical odyssey through the heart of darkness. Ghosts of Poseidon’s wrath float through each track, whether it be in the unexpected beat of ‘Oil Drum Requiem’ or the heavenly summoning call in ‘Hope For The Fragile’.

The journey finally breaches the nether regions of the world and comes to an end in a beautifully tear-felt ode. A voyage through the unknown has washed us upon the shores, leaving us alone at the kingdom of the infinite where our protagonist must meet his maker in a harmonic processed violin threnody.

“I drop exhausted to the ground
And surrender”

I can’t help but be so descriptive as TIATU is such a rich immersive experience that conjures up such atmosphere. With a plethora of rich alluring textures, it generated something new upon each listen.

I have only recently discovered Freeman’s work, but he will be someone I wish to continue following in whatever artistic medium he chooses. As with his accompanying poetry and photography he seems to flourish in whatever he tries his hand at. A superbly gifted artist, I wait patiently for his next work. If the time spent on TIATU is anything to go by, we could be looking at a 2022 release and who knows what apocalyptic world we’ll be living in by then.