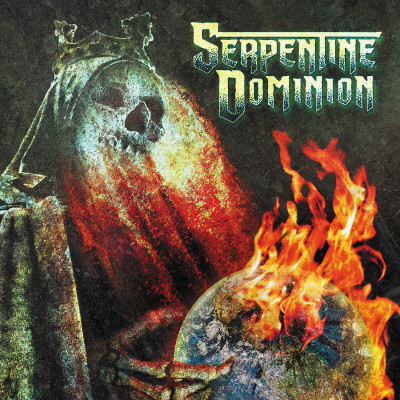 Adam Dutkiewicz is the man. First, he founded one of the best and most influential metalcore bands out there in Killswitch Engage. Then, through his tireless work and production with Killswitch, he has also produced albums for bands such as As I Lay Dying, Underøath, The Acacia Strain, and Unearth. Besides a producer, he’s also an accomplished studio engineer. Adam D has even had a side project with fellow Killswitch Engage bandmate, front man Jesse Leach, the fantastic Times of Grace. Oh, and he’s also won the Showcase Showdown on The Price is Right. So what does the man who’s done it all do next? Why, put together a death metal super group, of course! Serpentine Dominion features Dutkiewicz on guitars, Cannibal Corpse’s George “Corpsegrinder” Fisher on vocals, and former drummer of The Black Dahlia Murder, Shannon Lucas. Their self-titled album was released on October 28th, 2016 worldwide via Metal Blade Records.

Serpentine Dominion came about when Killswitch Engage, Cannibal Corpse, and The Black Dahlia Murder all toured together on the Rockstar Energy Drink Mayhem Festival in 2009. Adam D had always been a fan of Fisher’s vocals, and told him he wanted to create a metal album with him. Lucas was apparently within earshot, and was asked to lend his skills on the drums for said record. Most of Serpentine Dominion was written by Dutkiewicz within a year, but between the busy writing/recording/touring schedules of all three musicians, it took between that initial conversation and now to be completed. Leach wrote most of the lyrics for the album, revolving around corruption within the government, religion, big business, etc. with one of the most important presidential elections ever right around the corner, how ironic is it that this would be Serpentine Dominion’s inspiration.

The music itself is exactly what you would expect; Corpsegrinder’s pulverizing vocals, along with Lucas’ electric drumming, laid over Adam D’s chugging riffs and blistering solos. Dutkiewicz also gets in a few acoustic guitar ditties, as well as vocals, adding screams and clean backups to Fisher. Tracks like ‘The Vengeance in Me’, ‘On the Brink of Devastation’, and ‘Jagged Cross Legions’ show the immense power and skill that this trio has at their command.

Simply put, Serpentine Dominion makes you want to destroy everything. These guy’s grooves are as infectious as they are brutal. Adam D’s pristine production only makes this album that much easier to get into. It’s too bad this is probably a one off project, as I can’t imagine what the follow-up would be like. So enjoy it kids, because Serpentine Dominion might be a one of a kind, just like Adam Dutkiewicz.