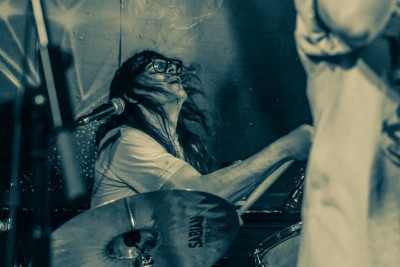 Between Supernormal and Baba Yaga’s Fun House, Casual Sect have had a great fucking year. This London punk outfit have acquired a reputation for severely rowdy performances, so I had a quick chat with London’s favourite yank, Kevin Morpurgo to learn more about the mayhem,

All good Rich. Thanks.

(((o))): How did Casual Sect come about? How long have you been going as a band?

Hmm, good question. It’s kind of a blur to be honest. About 2 years, I guess?

It’s been pretty full on, I gotta say. We were gigging and recording within a couple months of getting together. Pretty ironic, as I thought it was meant to be a fun side project to blow off some steam. Rather it picked up steam.

Robbie and our mate Thom had a bunch of riffs. You could call them songs I guess. They were all about a minute long. Said they were looking for a drummer, so I volunteered. Not entirely sure why I did that though. I’m not really a drummer. Don’t tell anyone! Soon Maggie joined. She’d never been in a band, but as it turned out, she’s a natural. Vicious vocal delivery, and this perfect combination of self deprecating humour and “do-not-fuck-with-me” attitude. Her lyrics are the best! Really funny, totally spot on. She was obviously one of us. So we started a ‘cult’.

Box records released The Hidden Persuaders recordings in the first week of January 2016.

Thom quit. Zoo joined. Loads of gigs. lots of recordings, re-recordings. mixes, re-mixes, new jams. I still have no idea what’s going on to be honest. Talk to me in a year.

(((o))): You play on lots of varied bills. From grind gigs through to psych which is awesome, do you enjoy that element?

The fact is, our sound was born out of necessity. Our gear is constantly in states of disrepair. Our initial recordings sounded appalling . Which really didn’t bother us to be honest. It had good energy. But,to be fair, we played way too loud. Everything was blown out. Drums were buried, so much feedback, background hiss and buzzes. I think we realised we were actually a ‘noise’ band as much as a ‘punk’ band. Whatever that means. Noise rock in a “Punk” Idiom? Whatever. We’ve just embraced it. It’s a lot cheaper to a add a few more layers of slop and do some more yelling.

Thomas Blackburn at New River studios did what they say can’t be done. He polished a turd to fine lack lustre we call our “sound”. We’ve been doing some stuff lately with Wayne Adams too. He’s another one! Good dudes, them. Great ears for the noisier stuff in life.

And yes, we’ve always dug playing on bills where all the bands are totally different. We prefer bills like that. We all have eclectic and ridiculous musical tastes anyway. And we all have love for things a bit heavy, noisey and/or experimentally leaning anyway. As long as it has Fuzz, it’s cool with us. It is weird playing on a bill where all the other bands have like 5 or 6 songs in their set and we have 19 or 20.

Aleks from Ghold laughed at the amount of songs we had on a set list for a 30 min slot. He was like “Guess how many songs we do these days …ONE!” Sometimes I think I should have joined a stoner or doom band.

(((o))): Tell us about your noise side project Ghost Fang, is it about showcasing the dark side of the universe?

Ha! yea, It’s a weird one. I love this project! Really hard to explain though. It’s pretty amorphous. When I listen back to it, it’s not at all how I remember it being when we played it. Then it changes again on the next listen. Very odd. At the moment theres no drums, no songs, no plan. Nice, huh? It’s got lots of nausea inducing drones, shitty pedals, a cello, a dodgy Korg and usually some really amazing visuals live. I’m really selling this, ain’t I?

I met ‘Casual’ Robbie as a fellow member of MOON RA a few years back. Since then we’ve often chatted about how much we dug doing those performances. How tripped out and fun the whole experience was.Then I turned Robbie on to Evil Acidhead. (The recording. Not a drug.) We decided the world needed more stuff like this. But rather than plumbing the depths of Hell and drug induced insanity, or channeling the energy of the Moon we decided to go some place properly scary. Space! …Bleakest darkest space.

Now we have fellow MOON RA alumnus Conny Prantera and harsh-noise journeyman Andrew Page (Raxil4 /Drones 4 U) involved, as well as recent addition, Will from Bruxa Maria, who’s been coming around with a collection of transmitter radios, weird pedals and other odd boxes. It’s a wild ride.

(((o))): Tell us more about your radio show, Black Impulse. What’s the mission of the show?

Black Impulse is a show I do w/ my mate Heather Weil. Aired live on Saturday’s fortnightly 10-pm to midnight on NTS. (nts.live) NTS are a London based internet radio station for those of you that don’t know. It’s been going for a little over 5 years and just keeps growing and getting better by the day. We’re honoured to be part of it.

So many great shows on there. We’ve been with them for about 5 years, so almost from the beginning. NTS is the only radio I listen to these days. All the shows are archived too. So you can get lost in there.

Black Impulse doesn’t have a mission beyond seeking out far out sounds to disseminate them. We dip in and out of anything that’s left-field, fuzzy, fucked, fun or frightening . Whatever. Our show’s are usually all over the shop really. We rarely plan them, and we often forget we have an audience and end up playing to each other. It’s good fun. Punk/Prog/Hard-Psych/Noise/Blues/Jazz/Doom/Metal/Drones/Fuzz. We got all that shit. Tune in!

Supernormal was a trip. Mainly because I wasn’t on one. It was the first year I’d spent most of the day NOT ingesting anything and everything everyone was offering me. My kids were there. I was on my best behaviour. And the sun was out! Never played in the sun w/ the Sect before. And we didn’t suck! Lessons were learned.

So many, man. Honestly, I’m hard pressed. I’ve seen so much good stuff this year.

Pig x7, Sex Swing, Lower Slaughter, Bruxa Maria, Girl Sweat, Cosmic Dead come to mind. Lowest Form. Lu Bods…the usual suspects all delivered. I randomly saw a lot of great noise and experimental stuff at New River with a some familiar faces involved. I wish I could say there was one. There wasn’t. There were a lot of great ones though…no wait! Blind Shake at the Shacklewell arms! That was the best gig I saw! Hands down.

The only ones we’ve been invited to play were Incubate and Supernormal. So we have a lot of love for them. But honourable mentions to Raw Power, Super-Sonic, and Roadburn. They never disappoint. Safe as Milk is looking pretty killer too.

Jesus dude. I don’t even know where to start. I could literally be here for hours and I’d defiantly still miss something.

I’ll stick to “people in my life who happen to have put out killer records this year”. Cool?

Off the top of my head, and in no particular order. But this is as good a place to start as any:

-Sex Swing ;Sex Swing: Two ex-bandmates and several of my oldest buddies make one of my favourite records of the year. Go figure!

-Casual Nun; Super Fancy Skeleton: Speaking of ex-bandmates. When I hear Sex Swing I still hear the spectre of Dethscalator lingering in there. Not a bad thing either. Maybe it’s just me. Same is true with this lot. Matt’s guitar sound is unmistakable. I’d recognise it anywhere. Well done Nun’s. You done made a banger!

-Mugstar; Magnetic Seasons: Psychedelic journeyman and all around righteous dude Jason Stoll and the gang do it again. It might just be their best yet.

-Bruxa Maria; Human Condition: Great record! So good live. I’m sure you heard this all before. But a band worthy of the hype. And wonderful people to boot! Go Gill Go!

-Ghold; Pyr: We share a rehearsal room w/ these guys. Their amps are taller than Maggie. And they have this mysterious chart on the wall w/ hieroglyphics, numbers and what looks like a secret alphabet. I think it might be tabs for that one song they play. But it could be a star map or an occult incantation of some sort. Good lads. Killer record!

-Lowest Form; Personal Space : Finally got a hold of Personal Space recently . These dudes kill me. I ain’t really pals with any of them, but Luke was probably one of the first people I met when I moved to London 15 years ago. Since then it’s literally been 6 degrees of Luke Younger. He’s everywhere. Helm is real good too. I still have friends in Philly who go on about the time they saw Birds of Delay in a bookstore 10 years ago.

-Gnod; Mirrors: What can you say about these guys that hasn’t been said before? Sonic warriors with tenticles stretching far and wide. I’ve got nothing but time and love for this gang.

-Grey Hairs; Grey Hairs EP: Whats the opposite of intensely relaxing? They sound like that. But more fun

-Broken DC:; Astragal: He’s a Capricorn, she’s a Pettybone and they sound nothing like either of their past bands. Or like anyone else really. Definitely not what I was expecting and a pleasant surprise. Produced by Daniel O’Sullivan which may explain a lot.

-Blown Out; New Cruiser:…OK…Fuck it! I’m gonna stop now. Let’s just say ‘Mike Vest/Matt Baty Inc.’ and call it a day on name checking records and mates . Just tune in to the radio show. I play all my finds there.

This year is gonna be a bit mad. I can tell already. I’ve been trying not think about it until after the holidays. But now that you mentioned it. First thing is renovating and moving the family into our new home by the sea.

Simultaneously trying to finish mixing and start tracking for the next couple of Casual Sect releases. Maybe a new vid. Ghost Fang will continue to release stuff on the web and should have a couple physical releases by the end of next year. Radio show, as always. Potential new band in the works. Gigs, mini- tour? if possible. Maybe put on a gig or two if the right situation poses itself. You know the caper. We’ll see what happens…