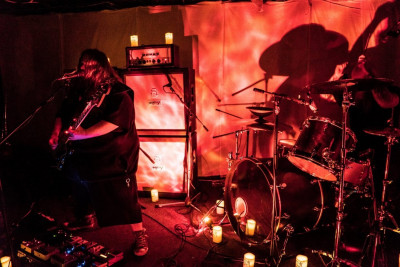 Things are well! Fresh back from a successful 6 week European Tour for our new record. Really amazing time. That said, glad to be back home with a little relax time no doubt.

(((o))): Eidolon is fucking nuts, I don’t know if I’m overjoyed or terrified when listening to it. Where did that album come from and what were you trying to achieve?

It’s honestly just a pure natural progression for us honestly. I stepped away and looked at what we had created before releasing it, and I wondered if I’d gone too far in a certain direction or another – but in the end, it’s sincerely just as natural as it gets with nothing forced or contrived whatsoever. The only thing we really ever set out to achieve, is to create an album that blows our own minds. Despite my enormous musical palette, I’m incredibly critical of music in general terms. In the end, I really love Eidolon and if others can dig or vibe on it, that’s a total bonus.

I formed this band with the intention of creating a 2-piece simply due to ease of touring (schedules/costs/logistics/etc), but wasn’t interested in it “sounding” like a typical 2-piece. I’m a sound engineer, and so I put that to work with respect to my sound. The idea is to utilize ambient drones and octaves. I go through hell to get the tone I want in the end, but it’s always worth it.

(((o))): Tell us about the music scene in Canada, are there any bands we should check out?

I’m very glad you’ve asked! You all should absolutely 100% check out :

Probably Saint-Petersburg, Russia @ Fish Fabriques on November 4 (I believe it was). Out of control!

My best of list for 2016 hasn’t been finalized yet but – here’s where I’m at currently (still have 21 days left to finalize).

We’ll record the bed tracks for our next album likely in March. As aforementioned, UK/France in April. Probably do some Canadian dates in the summer and likely back to EU for the fall- but we shall see!