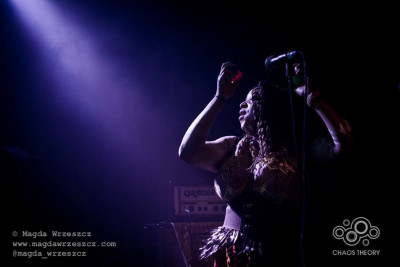 Vodun have had a fucking insane year! From a sold out record launch at the Lexington, to Bloodstock to a poster in Kerrang! Their busy and jaw dropping schedule doesn’t seem to be slowing down either; they are playing fucking Hellfest next year, AMAZING! In fact, it took ages to get this interview back from Chantal as Vodun were touring the country with Uncle Acid and the Deadbeats. Here’s here thoughts on 2016 from the road.

I’m very well thanks. I’ve just had a fantastic vegan brunch in Brighton, after a lovely jog along the coast, and not off to Southampton with Vodun to support and sing with Uncle Acid. Being on tour is the best.

(((o))): Vodun has had an insane year. You played Bloodstock, loads of other mahoosive gigs and a full sized poster in Kerrang. That’s all fucking bonkers, talk us through the highlights.

It HAS been a cracking year for Vodun. Like a rocket into the unknown, it’s been exciting and a little unnerving at times, but mostly good for all involved.

We started by finally releasing our debut album ‘POSSESSION’ through Leigh at Riff Rock Records, and we’ve had such good feedback overall. Somewhat blown away by having features in Mojo, Classic Rock & Kerrang! I think for lots of people the full page poster in Kerrang was a bit of a teenage dream, so for us to be in there made a lot of people pretty proud. James Sherry from Division Promotions has just been an amazing in pushing for people to actually listen to the album and give it a chance. I’m aware we’re not everyone’s cup of tea, and a little left field, so to get the response we did, was truly satisfying.

From there, Leigh did a stellar job shifting our LP and getting us top spots on iTunes and the like. It now looks like we might be out of our limited edition vinyl, which is nice. We’ve had some great gigs come through with Afropunk, Stone Free Festival at the O2, Hard Rock Hell, Desertfest & Bloodstock.

Now we’re on tour with Uncle Acid, which is just brilliant, as I also get to perform live with them on one of the songs I provided BVs for on their latest album, ‘The Night Creeper’. The crowds have been great, and the guys and crew in Uncle Acid are so cool and supportive. We would’ve loved a London show with the tour, but we can not wait for the Orange Goblin Christmas show at Koko on the 19th, which will kinda round off the end of the tour and year with a massive bang.

(((o))): It felt like the album was a long time coming, were you pleased with it and the reception?

Completely pleased, as I mentioned earlier, we were astounded by the reception we got from our fans, blogs, and the major music magazines. We struggled to release the damn thing, and lost momentum – we even lost our guitarist Oli (who’s now in heavy grunters Ghold). But Zel & I managed to pick ourselves back up and keep the focus going, and glad we did. We’ve lucked out but getting Linz on board as our guitarist, who’s just all round awesome and a superb band mate. We’re spending the new year focusing on coming up with a suitable follow up album, which is a bit daunting, but exciting at the same time.

(((o))): You sold out your homecoming show at the Lexington, did that feel amazing?

Our UK tour (with Limb) for the album release was topped off by a crazy sellout show at the Lexington in London. Kunal from Chaos Theory was pretty special. So was the gig in fact, as all of our friends came out. That night we signed with Ben Ward at United Talent Agency just before the gig, which really put the pressure on to not be shit. Ha. The night was electric and exhilarating… such a great night.

(((o))): People may or may not know Ben Ward from Orange Goblin is your agent. Most of us would have grown up listening to them. What’s it like being connected with such a colossal name in music?

It’s FANTASTIC, he’s such a good guy. Orange Goblin are huge (so is Ben!), and having Ben being in our corner is just the best. He has all of the experience being in a band, so he has the best reference point when booking shows and helping us grow.

It was our sold out show at the Lexington, without doubt. We had our mate Oli from Sweet Niche join us on stage with Baritone sax, which was just epic and heavy. I also had my mates help me out with some BVs. That felt pretty great. I remember sitting on the night bus home with a massive grin on my face, not knowing whether to laugh or cry it was so good. It was just a massive mile stone for Vodun to sell out a venue for our album launch.

Afropunk – it was kinda like a dream come true for me to have my little band of misfits perform there, but we got to see Young Fathers & Grace Jones. Grace Jones is where she is for a reason. She’s fearlessly insane as a performer. From the amazing head dresses, to the pole dancing male gogo dancer, everything was divine. But the festival itself had such a positive energy to it, it was something to breathe in and live in.

Bloodstock – hands down. The level of love and appreciation we got at Bloodstock just took my breath away really. I walked on stage in utter shock & joy at the number of people who came to the Sophie Lancaster stage just to watch us. I didn’t get to hang out and enjoy it as much as the other guys did, as I had 2 other gigs either side of our gig back in London. But it was great all the same. Hung out with Tom Dalgety and convinced him to record us for the new album. I told him we’re poor musicians, and might need to work out some other form of payment – I might just try to feed him for a year or something. Ha.

‘Human Condition’ – by Bruxa Maria is fantastic. Raw, punk-noise, fun and a little angry… Just like Gill! Ha. She’s great and so is the debut album, and I’m glad she’s back at it again doing what she loves, and with some fantastic mates to boot.

Writing the next album or EP… Trying to do as many festivals as possible, because they’re just fun – AND you get to see so many bands you wouldn’t normally be able to. We’re playing Hellfest next year, and Aerosmith, Deep Purple and Slayer are headlining – I’d never be able to see them otherwise!!! But next year is mainly about building on what we’ve done, with the release of the last single from the album ‘BLOODSTONES’ in Jan, hopefully we’ll be able to keep climbing.