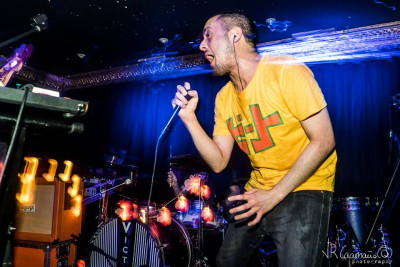 If  BRITNEY were a London based band they’d play every Cosmic Carnage, that is all.

Hey man. I’m well, thanks! I’m in Australia chilling with the insect hordes over Christmas.

(((o))): Tell us more about BRITNEY. How long have you been going? How did it start?

It’s been about 3 years since our first gig. I remember it fondly- we were supporting Knuckle Dragger and loads of people came out. We had so much fun.

As for our origins however, the memories are frankly less fun. Beef Wellington Enterprises took a fucking eternity to pair me up with two session musicians who could really bring my early acoustic demos to life- Robbie and Davy are proper L.A. blues boys, so finding our sound was a lengthy process. Robbie had to learn to play bass without slapping, Davy had to learn to drum without shuffling. On top of that, Beef Wellington had a “session ace” guitarist with us for the initial jams, until I realised that all he was doing was transposing the lead line from “Layla” into a different key for every fucking song. He’d been fleecing the poor bastards with that for years. A tough time, but here we are.

(((o))): You are a very unique band, it’s pretty extreme music but also lots of fun. How would you describe BRITNEY’s sounds?

I usually just describe our music as “bad”. It’s applicable in every sense, be it “not good” or “twerks good”.

Generally fear, perversion, lust, etc etc. They all exist in this depraved cartoon world in my head, populated by manifestations of people’s suppressed selves. The dark spaces that even social media can’t illuminate, the kinky stuff your mum gets up to behind closed doors. Most songs begin with visuals- in fact, I’d say the biggest influences on my songwriting aren’t musical ones at all. Chris Morris, Tim & Eric, 2000AD, anime, etc. From then it’s about inserting myself into those visuals and finding where my own experiences factor into it. I’m fairly shit at lyrics but it’s a fun process, not that anyone can hear the words anyway…

(((o))): Tell us about the music scene in Edinburgh. Any bands we should look out for?

Honestly, I’m the worst person to ask about it nowadays. The running joke that our scene sucks is an “issue” that’s so done-to-death that I lost track of what’s actually happening. It’s self-fulfilling and fucking boring. All I know is that there’s a whole load of excellent artists and a great amount of opportunity, and I try not to allow it to affect my own work.

We played three gigs in 2016 that were all-time highlights for us. A beautiful year for shows.

Firstly, our album launch show at Opium in Edinburgh. Opium is our favourite venue by a mile, in no small part due to their sound guy, Deano- a hilarious, professional and passionate dude whom we love working with.

Secondly, Cosmic Carnage at The Victoria in London. Amazing venue with a great engineer, among the best stage sounds we’ve ever had. Magical night.

Thirdly, we had the privilege of opening “The Whole World Window”, a benefit show in Preston for Tim Smith of Cardiacs. We’re outspoken Cardiacs fans, Tim being one of the few artists I’d consider to be a legitimate “hero” of mine, and being able to paricipate in such a beautiful cause, organized so lovingly by the greatest and most dedicated fanbase in the world, was…pretty special. We’ll never ever forget that day.

Ah man, not sure. I didn’t go to that many shows this year, I’ve been really busy. Julia Holter at Summerhall in Edinburgh was wonderful, actually. I’m in love with her latest album. Her current band are an excellent unit, brilliant double bass player in particular, Devin Hoff- really interesting chap who does a lot of cool work.

I didn’t do any this year. I generally don’t do them at all as a punter, too scared of the mud and the people. I do wish I’d gone to Primavera though, last time I went was 2010 and it was an unforgettable experience. They really know how to choose their acts. The line-up for next year is actually unbelievable.

This year has been a really good one for music, hasn’t it? Minus all the death.

My AOTY was “Meta” by Car Bomb, my favourite band for a few years and the best metal band in the world for that matter. They’ve had a good and very well-deserved year. They’re a band that fills me with a great deal of optimism- they’re slightly older guys with full-time day jobs, which to many people means “past it”. Yet, suddenly they’re crafting successful DIY releases, touring the world with Meshuggah and Dillinger, making some kid in Scotland feel truly inspired by the sheer compositional brilliance of their art. They exemplify the notion that it’s never too late to change the game, that genius is not the finite, perishable resource we often assume.

We begin to record album 4 in April. Likely won’t see a release til 2018 but it’s going to be worth the wait. Every aspect of us is getting amped up substantially- the definitive BRITNEY album, a monstrous patchwork of neon-lit depravity. It’s going to be awful.