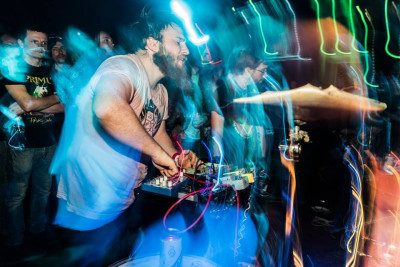 Matt likes nice beers and climbing things in his pants, that is all.

(((o))): You guys are seemingly playing more gigs than ever, are you picking up some serious momentum or am I just imagining it?

Momentum means nothing, the old system of music becoming financially viable or ‘successful’ is dead. Nobody is throwing money at us and that will never happen but its great to keep playing gigs and people coming to see us. However, throw money at us if you like, but not sharpened coins.

(((o))): Do you think you’d be able to function in a normal band with verses and choruses and stuff?

Yes, and I do. Don’t you think we have chorii?

(((o))): When you’re recording in a studio is it the same kinda vibe as a live show?

We’ve never recorded in a studio. The vibe is similar in that we don’t pay any attention to each other and some of us are too drunk to accomplish basic tasks. And some of us take our strides off. I’ve never been afraid to hold a man’s gaze – it’s natural. Have you ever held a man by the balls, Rich? We have. It felt like a lifetime, but it was in fact almost half an hour.

We will almost certainly tour in 2017. Depending on death or worse we’ll be going to France, Belgium, Holland and Germany with those filth mongers from Brighton, Plurals. It’ll be a time.

[Sorry about this shit question, of course Sly will tour in 2017, think I put that in there by accident – Rich]

Playing in Lisbon with Stef Ketteringham was pretty amazing. A place we’ve never been before but had a wonderful time and felt that we played well and there was an incredible atmosphere. That whole tour in April/May was great. Raw Power was a highlight, Selvhenter was blinding too. Also our weekend with Bruxa Maria playing in Birmingham and London was mint too. In short, we have played some gigs and mostly they were great.

Most noisy things at New River Studios are always great. Honey Ride Me A Goat/Snack Family/Asterisms and the Leverton Fox album launch were bangers. Dalek at Corsica was a banger, as was Jlin (Corsica) and Anla Courtis at New Rivs. Shout out to the Teeth of The Sea alldayer too – fine set of bands for a good cause and a mint day.

Its hard to say anything other than Supernormal. Safe As Milk for next year looks incredible too so looking forward to that – it’ll be even better when we get asked to play…

(((o))): What the hell are you up to next year?
Money, Guns, Socialism, Sadness. All of that on the next record. Hopefully some more touring, a longer UK one would be good before this rotten isle goes utterly to shit.

We’ve also got another record in the can that we recorded with Dead Neanderthals. We’re looking for some mug to throw their money at that and put it out for us. Label mugs get in touch, Its about dentistry. 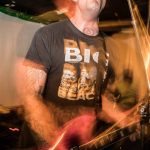 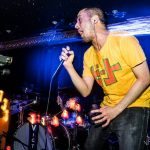 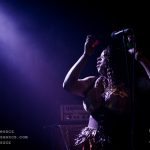 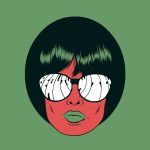