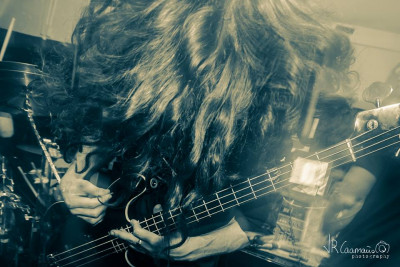 It’s hard to imagine life without the opening riff of Ghold’s PYR album that came out this year, it’s like a familiar blanket that keeps you so warm and safe. Ghold have had an insane year, touring with Bongripper, a performance at Incubate and we were so fucking chuffed when they agreed to headline of our shows under a church in Camberwell. Let’s find out what’s going on in Aleks’s mind.

Yeah man PYR turned out amazing, and extremely well received, its been a strange and grand journey. Its taken us from periscopably close to microscopably far, now, with the use of foresight we can see only, forward. (Buy it before we burn it. https://www.ritualproductions.net/rites/ghold-pyr-lp/)

(((o))): Is there a chance of another full length next year?

We are recording, come march, at Mirror man studios with the funkso sound shaman Tom Goodall (clentsch/cattle/super luxury…and on), in a grand old church in Leeds. Slow. joyless. rhythms. Should hopefully make its way out before the end of next year.

(((o))): How was touring with Bongripper? Are they as miserable as they seem?

It was a grand tour aye, crazy big venues, all be it post insanely debaucherous/ ‘The mutual misery tour band’ tour with Palehorse, and, therefore, Oli was covered in blood and scars by the first show, and the rest was antiseptic. It was great to play to many people all over the shop, and we all played our arses off, so pats on backs. Bongripper were not miserable, far too happy. But, Dennis, is the beast. Big ups.

(((o))): You’re a part time member of Arabrot, is that a dream come true? Has the experience been as good as you thought it would be?

Of course, every minute of it has been bizarre and beautiful, north america last year, europe this year, good crack! Ive always loved the band, i used to see them as much as i could when they came to the UK in their different incarnations, even then. Happy to call them my good friends now, ive learnt alot from the band and I’m glad to be and have been part of the ever rolling ARABROT CIRCUS! If i hadnt of bumped into you on that train and nagged you to put us on with them, it would never have happened now would it.

Best gig we played is tied between, INCUBATE FESTIVAL and THE CRYPT in camberwell, on those dates we fully realised ‘PYR’ live and itd be hard to replicate ever, ever… again. But we always like to change things up, both shows were very different. Rock n’drone.

This year? I have a very poor memory so im going to go recently where i remember – Aluk Todolo were insane, that band are amazing, seriously. We had the fortune of playing with them afew years back with yourenothuman Sofi Nowell, and they blew my mind. Still rate ‘Finsternis’ as their best release though…
SWANS are always a treat, they performed glowing man at Islington Assembly hall, Anna Von Hausswolff was supporting, that was quite an eye opener, gave swans a run for their money ( – check out her album ‘The Miraculous’ from 2015. )

In experience of late. Supernormal for the outdoors & Fatout festivals for the indoors, and looking forward to Supersonic to making a come back. Roadburn next year also looks ridiculous…

GHOLD have a tour to announce in europe next feb/march, we record our new LP with Mirror Man Studios in Leeds on return, then figure out when thats coming out and work out some more dates to support it come next year. We should be working with a Butoh choreographer for some stuff which will be mad. Hopefully a split with some special friends too. Many more strange things afoot that cannot be mentioned so keep your eyes out.