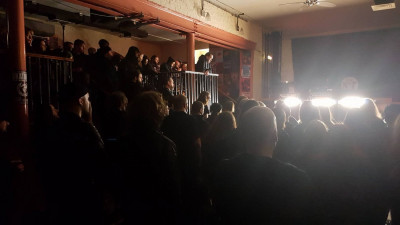 We  met Jonas back in October, when he came down to Cosmic Carnage with Lovely Wife to sell merch. He’s fucking cool guy, he puts out great recordings and the gigs he puts on in the North East look fucking insane. Here’s a quick chat we had!

Hello Captain Cosmic, I’m alreet as they say up here.

(((o))): Inverted Grim-Mill as a night and a label? What came first? Tell me a bit more about it.

Bands I knew in one way or another started asking me to help them get a show in the north east in about 2010, so I guess that came first. I don’t think I’ve ever really ‘booked’ a touring band, they all just ask me if I can source a venue and I do whatever I can to run the show if I like the noises they make. Bringing like-minded people together for a good time is the main thing! The label was essentially a joke for the sake of releasing a couple of (long sold out) silly things back in 2011-12, but I eventually decided it didn’t have to just be ridiculous nonsense. There’s a lot of great stuff of various kinds going largely unnoticed in the North East, hopefully I can bring some of it to a few more ears and get some of these bands out and about.

(((o))): You seem to put on/release very extreme music but also stuff that doesn’t take itself too seriously. How would you describe it?

Well I do tend to go with whatever I like, regardless of how serious it is. In many ways I find bands trying to be super serious all the time ‘funnier’ than bands who make ridiculous music and/or perform ridiculous performances. I do appreciate that not everyone enjoys a ‘novelty’ act at a gig as much as I do though, so I tend to collect the most notorious ones for special occasions. There’s also plenty of mildly amusing but heavy as balls acts that don’t categorise so easily, I guess I seek that sort of thing out. The label releases are all essentially made by friends of mine, who I just about trust enough to let them do whatever they like and I’ll go along with it… They all made some kind of racket that I liked to begin with, that’s how I know most of these people. Some of them are hilarious human beings who make excellent serious music, which is fine by me.

(((o))): What role does Inverted Grim-Mill play in the North East?

I am one of a number of people who put gigs on to keep us all from dying of boredom. Sometimes we work together or go it alone, depending on what the bands’ requirements are. Its good to have the option for co-promotion anyway, it certainly helps to bring fans of underground music together, and we all have more of a laugh generally. Shout out to: Omega Warfare Records, Disgrace To The Scene, Cruel Nature Records, Shadow of Venom, Snakes Don’t Belong In Alaska, Canteen Concert Club, Sadistic Screams, Great Northern Amplifier Worship, Distraction Records, Leave Me Here, Bro (UK) and anyone else I’ve had the pleasure of running a show with over the last five years. Extra special thanks to The Northumberland Arms for allowing me and various others to book who we like, and have them play there with minimal fuss.

As a record label, January to November 2016 saw the release on one free download of an EP of covers by Iron Skull from Wakefield, recorded 5-6 years previously. However I hope to be a bit more productive for the next 12 months. There’s a fresh Lump Hammer CD which just came out at Byker Grave and was recorded at their August Grim-Mill show with Bong and Ommadon. As if that wasn’t enough of vocalist Watts, there’s a Lovely Wife live in 2016 CD in the works… Two sets on that one, including a certain Cosmic Carnage show. 2017 should hopefully involve some proper albums by the likes of Neolithic, Geomancer, Lump Hammer and Iron Skull but I’m more than happy to let everyone continue at their own glacial pace and just release things whenever required. I’m working on some bits for new ‘signings’ too… a vinyl version of Kylver’s recent album ‘The Island’ for starters, but beyond that I’m just going to see what happens. Perhaps a compilation or two of local acts will appear too.

Very tough question. I know it’s a cop out to say everyone has been excellent, but huge respect to all the acts who made the effort to come and play an Inverted Grim-Mill show, especially those from further afield… Primitive Man, Dopethrone, Legion of Andromeda and Beehoover all provided particularly great headline sets, but I’ll always have a special place for our annual April Fools’ event with Omega Warfare Records. The 2016 edition featured Super Luxury, Petrol Bastard, Russ Abbotoire, The Newcastle Upon Tyne Speed Donk Experience and Gary (Spongegrind Squarecore) for maximum silliness. Byker Grave just happened and was fantastic too, again with Omega Warfare doing all the real work. Everyone was great but personally I particularly enjoyed Ommadon, Lump Hammer, Wode, Bodies on Everest, Rat Faced Bastard and of course the Portuguese party grind of Serrabulho.

Also very tough, I go to too many things. A bunch of things I’ve enjoyed in the North East courtesy of other promoters this year include Nadja, Scattered Purgatory, Earth, White Hills, Luminous Bodies, A.M. Grave, Wasp Bomb, absolutely anything that has happened at The Old Police House in Gateshead, and countless grind bands. I’ve also travelled to a few things, D älek in Leeds last week being a massive highlight, and of course that meeting of Shitwife and Lovely Wife in Brixton.

Roadburn is always a good one, a bit of a spiritual home I suppose – especially when I haven’t been getting my Supernormal fix. Watching Neurosis for four hours was ideal. Brothers of the Sonic Cloth, Sinistro, Jakob, The Poisoned Glass and G.I.S.M. were all somewhat mighty too! The atmosphere and community of the place is equally as important without a doubt. Tusk festival (where I volunteer at dogsbody level) was also fantastic and provided a great deal of inspirational performances from around the globe, particularly the likes of Senyawa, Rubber ‘o’ Cement, Wolfgang Voigt, Skull Mask and local Tusk fringe stars Xazzaz, Oppenheimer and Early Skrewdriver. Thinking about it, Desertfest London was good too!

Erm… I used to be quite on the ball with these sort of things, but now I just listen to whatever bands give me for my efforts. Pretty sure the latest Beehoover album ‘Primitive Powers’ was a 2016 release. I haven’t listened to that album specifically all that much, but they are almost certainly the band I’ve listened to the most this year. Monoliths’ self titled LP is also pretty thunderous and had regular spins, and that final Palehorse LP of course. The super heavy splits by Primitive Man / Sea Bastard and Legion of Andromeda / Ommadon also kept me going…

In terms of gigs, I’m just carrying on as normal. So far there’s Mare (Hydra Head) confirmed for playing in January and Mammoth Weed Wizard Bastard playing on Valentines Day alongside Kylver and Lump Hammer, both shows taking place at our beloved Northy Arms. I’m also working on about 3 more shows for early in 2017 in a few other venues (I won’t spoil any surprises), and no doubt people will keep asking for more favours. As I said further up, I’d like to do more stuff as a ‘label’ in 2017 too, maybe collaborating with other labels in a similar way to working with people on shows.