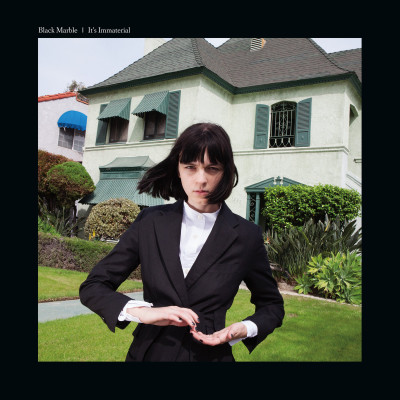 It's Immaterial by Black Marble

Black Marble’s strain of murky yet danceable and romantic music has always stood in a bold place in the way of dark wave and goth rock born from sounds of the 80’s. 2012’s A Different Arrangement, released through Hardly Art, was one the project first got its grip on me; the synth compositions were cold and haunted yet always melodic and doused in a sentiment that really pulled emotional engagement out into the spaciousness of the tracks. The duo would create songs that are constantly overbearing in their mood yet you never want to leave they’re hold. This recent offering features Chris Stewart taking the project into his own hands to produce It’s Immaterial, quite possibly Black Marble’s most absorbing and cohesive record thus far.

The project’s significant and engulfing quality isn’t as instantaneous as previous records, with the introduction track ‘Interdiction’ acting as a jarring and almost uncomfortable entrance to the record. However, the drop on the other side is a welcoming sadness in the form of ‘Iron Lung;’ opening with a solitary bass line that carries into the synth melodies, all the while shrouded in a sonic haze that only Black Marble’s music seems to possess. The project’s strongest attribute is this ability to form songs doused in their influences and a nostalgic overtone, yet can forge this almost over bearing sense of yearning in the often-simplistic structures and synth and bass compositions. All the while Stewart’s vocals carry a mood and dissatisfaction that works in his favour as well on this release as all those prior. Take ‘A Million Billion Stars’, a definite sign of maturity in the song writing as the repeated rhythm is both hypnotic whilst also strained as if in waiting; the lyrics further the urgency in the track’s opening “Hold the place in the line/Only a matter of time.”

The urgent mood is certainly a consistent notion that the album gives off, possible more so than A Different Arrangement. Tracks like ‘Self Guided Tours’ and ‘Woods’ I feel encapsulate this wholly, with deep repeated drum rhythms and warm bass lines that stand as the underlying harbinger of every emotional detail throughout the record. The album feels isolated as a whole piece; a positive in that it manages to evoke something different from its predecessors yet perhaps lacks in its favour as the previous LP contained a number of standout dark wave staple tracks in comparison.

It’s Immaterial, overall, expertly creates the sense of melancholy and an underlying sense of despair in the form of pulsing, often elated tracks that somehow sooth and discomfort at the same time. It manages to immerse the listener from front to back, which is fundamental within a genre so regularly revisited in its throwback sonic aspects. It may not surpass previous output, but it highlights a new beginning for a project in future releases.