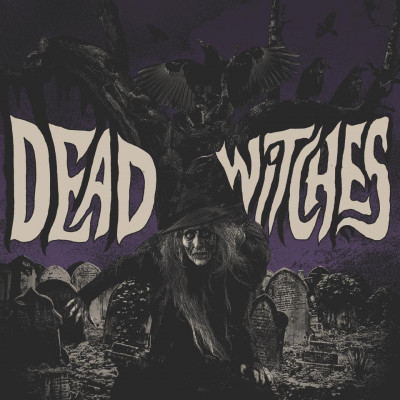 Ouija is the debut album from this Anglo-Italian supergroup formed by drummer Mark Greening (ex-Electric Wizard, Rameses and With The Dead) and his vocalist partner Virginia Monti (Psychedelic Witchcraft).

After a short thunder and rain effect reminiscent of Black Sabbath, a bass riff and guitar melody start the album’s opening track, a melancholic, droning intro that leads into the album’s first full song. ‘Dead’ is a mid-paced jam that builds in intensity and sets the tone for the rest of the album. Monti’s vocals have a slight distortion effect that resembles a megaphone that I’m not that keen on. It doesn’t spoil the record, but I would like to hear the same songs remixed with them clean. She seems to be struggling to sing in the key these songs are written in too, at least on first listen. Her vocal style grows on you with repeated listens, but maybe they could have changed the key to suit her vocal range.

All six tracks are quite similar, based around one or two sludgy chordal riffs and lead by Mark Greening’s trademark, tom-heavy drumming, interspersed by the occasional faster part. Most stoner and doom songs are guitar-lead, so it’s quite interesting to hear this approach of having the drums holding everything together. It’s not surprising, though. Greening is the celebrity of the band, having reached legendary status in the classic early Electric Wizard line-up that gave us Come My Fanatics and the sludge doom classic Dopethrone. It’s fair to say that he has a couple of drum fills that he uses over and over again, and some might tire of this after a while, but he always sounds good and brings life to any band he plays in.

While all six songs are quite samey, they do give the album a consistent feel and it  sounds like an extended, well choreographed jam session. It’s not that long either, at just over 30 minutes. Some bands release longer EPs. That said, there is something of a trend for shorter albums at the moment. As vinyl continues to regain popularity, there is less emphasis being put on filling an 80 minute CD with mediocre bonus tracks. Ouija makes its point then leaves the listener wanting more; it serves as a reminder that not every album needs to be a gatefold double LP. The cover artwork by Goatess Doomwych completes the package and gives the album a nice cult horror feel.

The album was recorded at Chuckalumba, the all-analogue studio in Dorset where Electric Wizard recorded Dopethrone in 2000. I’m listening to a digital promo, but there is plenty of warm low-end on this record that will only shine through all the more on the vinyl version. It’s a slow-grower, and I deliberately spent a week or so listening to it on rotation before writing this review because I didn’t connect with it on first listen. Let’s be honest, it’s not the classic that Dopethrone was, but it’s a solid debut that doesn’t overstay its welcome.

Ouija is overshadowed by the sudden, untimely death of the band’s guitarist Greg Elk. Most bands would give up if something like that happened so early in their existence, but Dead Witches are continuing and will be on tour soon with a new guitarist.