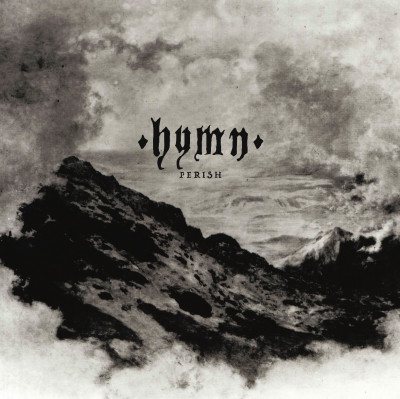 Norwegian doom/metal duo Hymn’s debut album is entitled Perish. The duo composed of Ole Rokseth (guitarist/bassist/vocalist) and Markus Støle (drums) hewed together a dark and heavy album for their opening collaboration as Hymn. I’m often impressed by the depth of sound two musicians can create and Hymn have certainly perpetuated this.

Hymn’s sound is comprised of various sub-genres of metal. While Hymn is primarily a doom metal band, there is certainly other metal sub-genres present in their sound including black metal and post-metal. Perish is full of grim, melodic riffs and rumbling drums, but there is also an discernible effort to incorporate some ambient atmosphere and alternating loud and soft tonal moods.

The album sets the tone immediately with the opening track ‘Ritual’. The sounds create a chilling soundscape. I envision thick fog and a black night as the ambient track emits a sinister, creepy vibe before leading into the monstrous 12 minutes ‘Rise’. Rokseth’s vocals emanate a ferocious and intense anger with screams and wails I found reminiscent of Conan. ‘Rise’ illustrates that the band is capable at both ends of the sonic spectrum despite residing primarily in the realm of metal malevolence.

The track ‘Serpent’ was a stand-out track for me. From the jittery, aggressive opening to the intense battle between guitar and drums, the track sounded like a menacing sea pounding a coastline during an unrelenting storm. There are plenty of harsh guitar growls, bleak tonal passages and crashing drums. Rokseth’s longer shrieks also work really well with this track and harken back to classic metal. ‘Hollow’ is a sputtering, chuggy and grimy track. Rokseth vocals are spat out like nasty snake venom. Each word drops with seething raw emotion and savage loathing.

The band shows impressive musicianship during the numerous instrumental sections throughout the album as all the tracks (other than the intro) are at least six minutes. Between the growling vocals are many time changes, somber atmospheres and different sonic elements that keep the material interesting. The band clearly makes an effort to explore beyond the scope of doom metal. For example, there are moments on ‘Spectre’ that offer a slightly brighter sonic palette amidst the clattering drums and stabbing riffs. The closing track ‘Perish’ is a head bobbing juggernaut that careens from a raucous energetic high to a gloomy, mournful slow plod. It drips with heavy, melodic post-metal riffs that spiral into a closing jumble of sonic madness and unsettling feedback. An intense ending and dramatic exclamation point to close out the album. The album runs close to 50 minutes and there are a few moments that get bogged down but they are brief and don’t diminish the overall quality of the album significantly.

Perish is a sonic gut punch. On the album you’ll find heavy tonalities and biting vocals propelled by incessant drums all dripping within a dark atmospheric ichor. A recommended listen for fans of aggressive, brooding and imaginative metal. Huah!