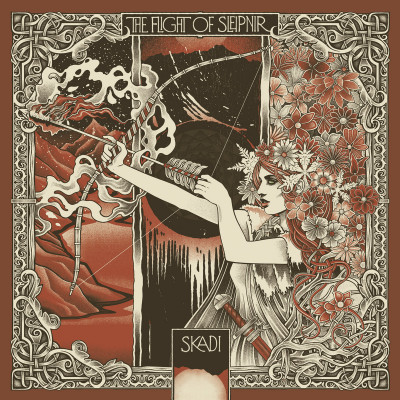 Skadi by The Flight of Sleipnir

Many seem to complain about the “post-metal” label used to describe the recent rise of grandiose, layered and textural metal pioneered by Neurosis, Isis etc, saying that it is perhaps too restrictive and even degenerative at times. This may be the case, but when faced with a myriad of exciting bands that push the envelope of what it means to be heavy, it’s difficult to avoid being pigeonholed, even if it may not be a particularly bad thing to be compared to the more forward thinking metal bands to have made waves in the past few years.

Colorado’s The Flight of Sleipnir fit comfortably into this category, but once again, being labelled as post-metal in this scenario is definitely not a bad thing. The band waste no time getting to the point on bludgeoning opener ‘Awaken’, where droning doom metal riffs give way to ambient clean sections, only to build up again, heralding the arrival of the harsh vocals. The production assists to bring out the nuances of the band’s sound throughout Skadi; everything is perfectly audible, and nothing is lost. This is crucial; you don’t want to miss a thing.

The opening song perhaps best demonstrates The Flight of Sleipnir’s mission statement; waves of sound, punctuated by solid drumming that can go from Om-like mantras to blast beats in seconds. Psychedelic guitar solos often push through the waves of guitars, adding layers to the already extremely heavy sound. The band, throughout the 5 songs on Skadi are keen to show how effectively they can combine their influences. ‘Tenebrous Haze’ is perhaps the dirtiest number on the album, the first half consisting of sludgy, southern metal riffs that will please fans of Eyehategod or Noothgrush. However, the band know when to mix things up, and after a brief respite, clean vocals and guitar harmonies bring the song to a fantastic conclusion.

‘Earthen Shroud’ takes a different approach, with acoustic guitars and melodic vocals proving to be a genius move given the previous songs heaviness. However, once again Flight of Sleipnir show their effectiveness at bringing variety to their compositions. As the Hawkwind-esque keyboards take the forefront, the rhythm section provides a perfect backdrop for when the guitars drop out, and suddenly the band are firing on all cylinders again, walls of guitars taking the track to new heights. A note must be made of how none of the movements on any of the songs ever feel disjointed or out of place; the songwriting is untouchable.

Where a lesser band may consider a token interlude to give the listener a break, ‘Voices’ is a mesmerising piece with arpeggiated acoustic chords provide the backdrop for a serene atmosphere. Even this short (I suppose, by post-metal standards) piece is given the utmost attention, as weeping violins provide a mournful outro. ‘Falcon White’ is a hell of a closer, starting with minimal percussion and lightly strummed chords, which build to a brilliant heavier section, before the band bring back everything down for a multi-layered vocal section. Despite the ups and downs in terms of volume and intensity, The Flight of Sleipnir never let the songs lose momentum, which is quite a feat in itself. While the aforementioned change in atmosphere of ‘Falcon White’ may sound out of context on paper, interesting drumming and momentum keep everything flowing perfectly.

As the final clean notes of the album closer ring out, I find myself remembering something exciting about every single song on Skadi. While it is a long listen, the nuances in sound and clever songwriting will have you coming back for more. It must be said that despite most of the songs being around the 10 minute mark, the album never gets boring or formulaic, which itself is testament to the band’s songwriting skills.