(((O))) Interview: The Legendary Buzz Osborne from the Melvins and Crystal Fairy 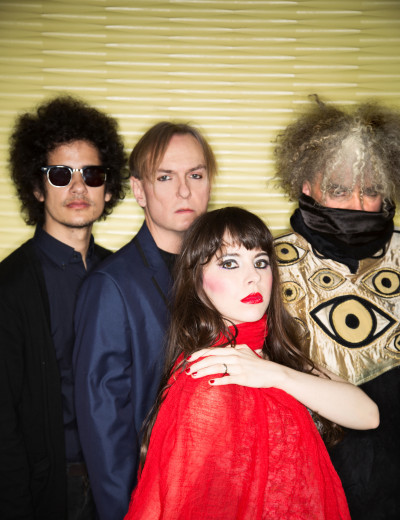 If I think about what’s inspired us over the years, it's people like Miles Davis, especially in the drumming. Or Captain Beefheart. That’s basically what we are, Captain Beefheart playing heavy metal. We’re a punk rock band.

Buzz Osborne is a legend in the music industry. If you haven’t heard of him you need to drop what you are doing right now and buy all the Melvins catalog, all of it, and listen to it from beginning to end. Do it now. Stop reading this article and do it.

You are still reading! Very good, then. You’re one of us. The in-crowd. The Illuminati of all things good music. So, I’m probably not telling you anything new by saying that apart from being the guy who introduced Dave Grohl to Kurt Cobain in the early days of grunge, he, along with his band-mate Dale Crover, has had a storied career as the seminal band the Melvins. In addition, he and Dale have had numerous partnerships with the likes of Jello Biafra of the Dead Kennedys, members of Big Business, as well as Paul Leary and Jeff Pinkus of the Butthole Surfers. The pair’s most recent project, called Crystal Fairy, is a collaboration with Teri Gender Bender of Le Butcherettes and Omar Rodriguez-Lopez of The Mars Volta and At the Drive-in fame and should be available for purchase February 27th.

I managed to catch up with Buzz who was very kind to spend an hour walking me through how the group met and what led them to write an album together.

Buzz: Teri’s band, Le Butcherettes, did two tours with us, so we got to know her and really liked her signing. We initially planned to just jam together. Me and Dale were working on some riffs and arrangements, and the second I heard her sing on them I knew this was going to be great. I just knew it.

Buzz: The vast majority of the material came from me and Teri. A couple of the songs came from jamming with all four of us, but I wrote most of the music. Everybody added, though, and everybody played incredibly well on the record. So basically, what happened was, we showed up at the studio Dale and I worked on some riffs. Teri wrote lyrics and vocals from listening to us practice so that when we had some semi-arrangements done she was ready to sing. Se we said, hey, let’s track it and see how it sounds. And that’s how it happened.

Buzz: I wrote it specifically for her, for her to sing on. But here’s the crazy thing: I would say that the entire writing and recording process, minus the mixing, took less than eight days. It was insane, incredible! We wrote and recorded three of the songs in one day, the first day that we got together, me Dale and Teri. ‘Drugs on the Bus’, ‘Necklace of Divorce’ and ‘Bent Teeth’. Some of my favorite stuff I’ve ever done. It was incredible.

Buzz: Well what it is, is, that I’ve surrounded myself with people who are extremely talented. I mean if you look at someone like Pete Townsend, one of my all-time favorites, and a super underrated guitar player, in the late 60’s early 70’s he was writing songs for John Entwistle and Keith Moon to play. You can’t go wrong. I mean, Jesus Christ, that’s the dream come true. So even with the Melvins I’ve always prided myself on playing with people who are top notch players. It makes my job easier.

But a lot of it has to do with we’ve all had careers in the music business for a long time, which helps you know when something is good and when it’s done. You don’t want to over think things or flog something to death. Believe me, I’ve done the flogging before. Records like Ozma [Melvins] to me sound flogged even though a lot of people like that record. We would do a better job if I relearned those songs and recorded it in one day, it would be a better record. You can beat the life out of songs by rehearsing them too much.

Buzz: Teri came up with it. It was the name of one of the songs and we just decided it would be a good band name. I liked it because it’s non-confrontational. I’m not sure if the song or the band name has any reference to the movie. Teri wrote the lyrics to that song. She never mentioned if it had anything to do with the movie. I know she liked the movie. I never saw it.

Buzz: Half was done in Omar’s studio in El Paso and half in my studio in LA. We did full songs in both studios and also did a fair number of parts that were later put together.

(((o))): When I listen to the album I’m struck by Teri’s vocal range. She’s really something.

Buzz: Yeah she’s got a hell of a voice. Her range is impressive. I think she’s a force of nature. She’s an unbelievable talent.

(((o))): Did Omar and Teri speak Spanish when they didn’t want you to understand them?

(((o))): A lot of musicians do their best work when they are young, but some (for instance Swans or Leonard Cohen) just got better with age. I think you guys are in that latter camp in that your recent work is as good or better than anything you did in the 90’s. Any thoughts?

Buzz: I agree. And thank you for saying that. I’ve always thought that we age like wine. I think we are doing our best work on every record we do. Now, granted, I don’t see it with the same eyes as everyone else. There are things I’ve worked on that were incredibly difficult to get down on record, that I was extremely proud of that no one ever really noticed. And then other songs that are more popular are not as exciting to me. I don’t hear it the way they do. I’d say a lot of my career I wrote music that was under appreciated, but that’s not the people’s fault. Our fans are our fans and I can’t tell them which songs they should like more. You work your ass off and people don’t notice haha. And don’t get me wrong, it’s a luxury problem and I’m not bitching at all, I just think it’s funny.

Buzz: Who knows. We figure that out as we go. We are in the middle of finishing a double Melvins album and another one after that. It will be our first double album. We don’t wait too long with anything. Steve McDonald from Red Kross will be playing bass on it.

(((o))): This is where I start asking about guitar gear, especially about his use of Electrical Guitar Company guitars that are all aluminium…because I’m a big nerd and that’s the sort of thing nerds ask about.

Buzz: On the new record, I used all sorts of guitars. So, in any given song you could be hearing an EGC, a Fender Jaguar or a couple of Dan Electros because they all do different things. They all do wonderful things. It’s really more about finding out what that guitar can do. Don’t try to make it do something it can’t do. Every guitar has different songs in it and different sounds in it. But the older I get the more it’s clear to me that with gear it’s the Indian, not the Arrow. I honestly could make a whole Melvins record with a Dan Electro and it would sound fine. You could give Jimi Hendrix the worst guitar and worst amp in the world and he’s still going to bury your ass. Don’t get me wrong, it’s really nice to have good gear, but the player is what matters. Good guitar players are good and will sound like themselves no matter what they are playing through. That said, I love a new guitar. I love getting a new one and seeing what it can do. I’m like a junky on a jones whenever there is a new guitar around.

Buzz: I love the guitar. I love playing guitar. I don’t know how to read music but I play all the time, whether I’m on stage or not. And I can’t play like any of these hotshots like Steve Vai and I don’t want to. If I had my druthers, I’d play more like Keith Richards. Not million-mile-an-hour guitar solos, fuck all that. My favorite players are people like Billy Gibbons or John Spencer from the John Spencer Blues Explosion. I think John Spencer is a massively underrated guitar player. I don’t know why people don’t talk about his guitar playing. His abilities are as good as anyone I’ve ever seen. He says more to me in a song than a lot of other guys do in a whole catalog.

Buzz: I’m more drum oriented and I think a lot of new metal bands have exceptionally bad drumming, so I prefer to listen to the bands that they are all trying to emulate, the originals in the genre. I suppose if I really went through all the current metal bands I’d find something I really like. I like Mesuggah. I like them better than a lot of the bands that are nerds dressed up with corpse paint. Haha. It’s like Kiss. Say what you want about Kiss, but they had good songs. But I listen to a lot of stuff, my tastes are wide open. And if I think about what’s inspired us over the years, it’s people like Miles Davis, especially in the drumming. Or Captain Beefheart. That’s basically what we are, Captain Beefheart playing heavy metal. We’re a punk rock band. My favorite metal album of all time is Unleashed in the East by Judas Priest. Me and Dale both agree. Everything that heavy metal drummers do is on that record. I talked to Dave Lombardo (of Slayer) about this and he was like “I learned every single thing I do from that record”. That record goes all over the place. The covers they do are amazing, the dynamics are amazing, the songwriting is second to none. I think metal as we know it comes from records like that one whether the bands know it or not.

Buzz: In all my 30 plus years of being in the music business I’ve never heard anyone ask me a stupid question. I’ve never answered the same question twice. Haha.