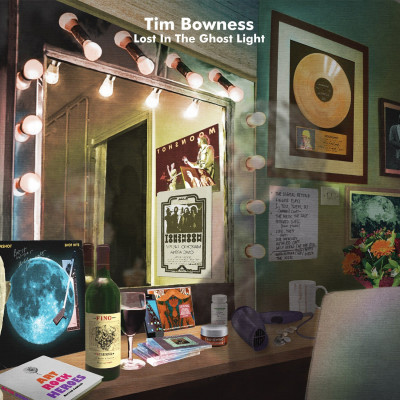 Lost In The Ghost Light by Tim Bowness

There’s a something of an elegiac feel to the latest long-player from Tim Bowness, coupled with a gloriously retro-take on progressive rock. Lost In The Ghost Light is the fourth album from Tim, and while it bears his familiar, meticulous, approach to composition and production it is his first proper ‘concept’ album.

It takes as its concept the reflections of a fictional ageing rock-star Jeff Harrison, leader of the equally fictional 1960’s/1970’s psychedelic progressive rock band Moonshot. It considers Harrison’s reflections on his life/career and the choices that took him into what plainly is middle-age obscurity. Imagine Brian Pern and Thotch, but without the fun if you will, and you’ll be halfway there. Except we probably are already there, and Tim Bowness is already there – no, not in obscurity, but if you take a look around your record collection you will – no doubt – have dozens of records by bands that were really massive underground acts that broke through into the mainstream in the 1970’s and which are now defunct, or split, or gone on to other things or even gone on to the heavens. This is the world that Harrison inhabits and which Bowness uses for his study.

It’s no mistake to say this record is a kind of elegy. It’s no mistake either to say it isn’t a Pern style pastiche.Tim Bowness – on all his recordings to date – is very, very interested in the things that make us tick particularly in that sense of a moment when we see our past drifting away from us and an uncertain future taking it’s place. This sense of tangible anxiety/ennui/loss is all over Abandoned Dancehall Dreams (check out ‘The Warm Up Man Forever’, ‘Smiler at 50’), or even see ‘At The End Of The Holiday’ on Stupid Things That Mean The World. Constantly Tim is an observer, always putting songs in terms of “You were”, “She was” etc. We never find out much about Tim, or what he feels, but he has the clear clinical eye of a good counsellor or therapist who never jumps to judgement, but watches, observes, and leads you to come to your own solutions.

This may sound a bit over-egged for what is, in fact, a record review, but it is important to understand where Tim is coming from – particularly so in his observation of Jeff Harrison. The album could have been sub-titled “An Observation By Tim Bowness”, which would – as King Crimson fans will recognise – chime in quite well with the 70’s prog-rock vibe.

As we’re on the subject of a classic prog-rock vibe it’s also worth noting that Jethro Tull’s enigmatic frontman Ian Anderson guests all over this record – bridging if you will the gap between classic and modern prog. I wonder if Tim’s opening gambit was something along the lines of – I’d like you to guest on this record. What’s it about?, Uh…an old washed up rock star….

Except Anderson is anything but washed-up – he’s gone from strength to strength and all these years later has a loyal and massive following globally. If anything, he represents the potential of what the fictional Jeff Harrison could have been. So there is – even in the record’s guest performers – layered meaning that enriches the album concept.

In addition to Ian Anderson, Lost In The Ghost Light features Stephen Bennett, Colin Edwin (Porcupine Tree), Bruce Soord (The Pineapple Thief – doing some absolutely blistering work here), Hux Nettermalm (Paatos) and Andrew Booker. Giving the record the full craftsman’s polish from behind the desk is Hemel Hempstead’s finest (and Bowness’ No-Man bandmate) Steven Wilson. Also returning to Team Bowness is Jarrod Gosling (Regal Worm, Cobalt Chapel) who provides for a third time, the album’s artwork (a painting of a shadowing ghostly Harrison looking over an empty dressing room, with lots of detail worth looking at. It put me rather in mind of the cover of Eno’s Here Come The Warm Jets, but without the porno playing cards).

As you would expect the musicianship is flawless. Tim’s laid-back compositions might not be to everybody’s taste – it’s often slow-burning, soporific, and takes it’s time to build to a feverish level (for me – all these are strengths), but nobody could deny the care and attention that has gone into making this record – these are masters at work, and at the top of their game.

Tim is steeped in prog old and new and there’s a lot of fund to be had spotting musical motifs that exist throughout the playing time. I particularly liked the long instrumental section of ‘Moonshot Manchild’ – very reminiscent of Duke or And Then There Were Three era Genesis. Other highlights include the tough love of ‘Kill The Pain That’s Killing You’ and the sublime ‘You Wanted To Be Seen’. Wonderful stuff.