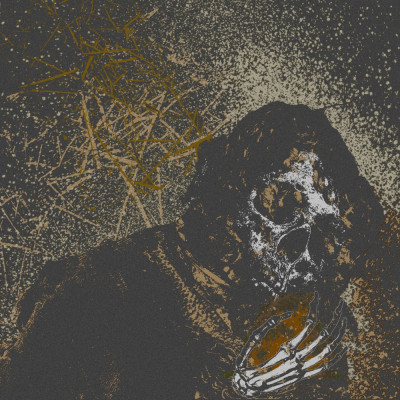 Decline. Is there any better word for these dark days? Is there any better way one could summarize the ‘civilized world’? Stuck in a maelstrom of psychotic viewpoints, baffling demands for respect, and everyone calling everyone liars, I don’t think I could conjure a better one. These days are like drowning in a thick bog of hate, while surrounded by a fog of uncertainty. Those of us that haven’t fallen to extremism on one end or another (either way, you’re a fucking snowflake it seems. Enjoy your ‘uniqueness’) have likely taken to doubt anything and everything. And when it comes to getting through this insanity, it’s bands like Vermin Womb that weirdly make sense of that looming shadow.

There is nothing pleasant, nothing positive, nothing I can say that will adequately summarize Decline. The album is an aggressive culmination of filth, hatred, disgust, and inner darkness. A total stripped skeleton that doesn’t even spare time to leave meat on its bones. It’s simply a raw, grinding experience that gives no quarter to the uninitiated.

Vermin Womb is a project comprised of members of Clinging to the Trees of a Forest Fire, Ethan Lee McCarthy (Primitive Man, Many Blessings, Withered), John Damon and Zach Harlen. The band has only one other EP to their name out via the mighty Throatruiner Records. And with the credentials Vermin Womb has, you know what to expect.

Decline is a grinding death metal experience that locks its cold, raw fingers around your throat and crushes your windpipe. And as you thrash and die slowly, it just keeps screaming into your face before tossing your useless body off to the side, dissatisfied and still hungry. Decline is raw. Utterly, hopelessly, raw. If you’ve heard any Primitive Man, you’ll know ELM’s love of feedback. And just like their previous EP Permanence, that’s exactly how the band bursts into this release. An unpleasant screech and before you know it Vermin Womb takes off with the opener ‘Entomb’.

You’ll notice immediately that Decline has an urgency. A raw slab of insanity and personal darkness that holds mercy for no one. Decline is significantly rawer than Permanence and more unhinged. The previous EP feels more like a testing ground now than anything else. Songs are shorter and more desperate. The longest barely clocks in over four-minutes and the rest come in usually around one or two. Points are made quickly, and without much consideration for the in-betweens.

See, Decline flies by so fast that the first few listens are like one twenty-four-minute track. It just keeps slamming and hitting so hard that it’s like endless torment. But give it time to sink in because there’s more here than meets the initial ear. Ride the low-end waves of ‘Industrialist’, where Vermin Womb slow things down but still sound like a bulldozer. Then get into ‘Disrepair’, a fitting song title to follow ‘Industrialist’. The track is utter madness; harsh, grinding death that blasts through and through.

See, the moods scattered throughout the junkyard madness, despite the loudness. But, and it’s weird writing this, they’re subtle. Like the aforementioned ‘Industrialist’, Vermin Womb do downplay their music and let things stew. But it’s never done with the idea of bringing the aggressiveness down. It’s like the difference between being chased and being stalked. Like the person chasing you has suddenly disappeared but you know they’re still there.

And though the nature of Decline may sound stripped down, the album has an epic feel. Take the closer track ‘Cancer’ as an example. The song kicks on with a small intro, but much like the rest of the album provides no comfort zone. But wait for it, and that hardcore/punk section kicks on and it sounds like a circle pit opens up. Stick with it. The song starts to slow down a bit but that punk aesthetic sticks. Or how about ‘Age of Neglect’? The song doesn’t have nearly the grinding intro that a lot of the other tracks do. It’s got a doomy/death metal start that moves into deathgrind. The guitar remains epic sounding though. Even once the track gets into blasting, the elevated feeling never flees.

Decline isn’t an album that lets you in easy. Like Primitive Man, the songs sound so nihilistic that you’d swear the foundation of your residence is crumbling. The album is a constantly crushing piece of darkness, depression, anxiety, and aggression. It’s the kind of thing that you play on full volume when you’re at your lowest and the world around you has dissolved.