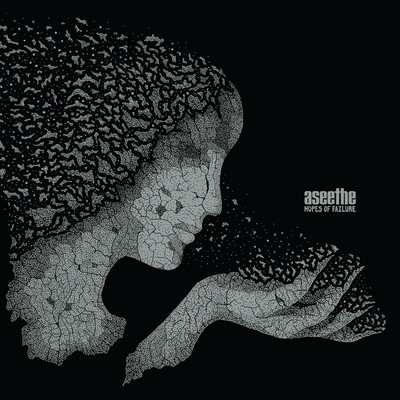 Hopes of Failure by Aseethe

Thrill Jockey might not be the first label that springs to mind when it comes to metal and its bottomless pit of sub-genres. Yet over the past few years their name has become something of a stamp of quality for heavier acts; they’ve quietly put together a stable of the most cerebral and forward thinking metal bands around, including the likes of Wrekmeister Harmonies, Liturgy, The Body and Sumac. So when they get involved with a new band of riffmongers it’s a safe bet they’re worth looking into. Enter, then, Iowa trio Aseethe, purveyors of deliberate, abstruse doom metal that hits like a juggernaut and crushes like a steamroller.

Hopes of Failure, their Thrill Jockey debut, follows several prolific years of self-releases and splits. The opportunity to make a first impression on a wider audience must have made it tempting to play it safe and consolidate their sound. If they felt that temptation then it clearly had no effect on them; Aseethe instead elect to continue their steady evolution, drawing back on the samples and noise elements of their earlier work and attempting to create the same drone like vibe with just guitar, bass, drums and strangled screams. It’s an admirable approach and it pays off dividends – the 4 lengthy, uncomfortable tracks here might not be the easiest of listens but they’re rich with detail and deliciously, deliriously heavy.

The drone aspect of their earlier work is retained through an almost shamanistic use of repetition. ‘Sever the Head’ is a molasses paced patchwork of elastic riffs and noise that flits between languid and slightly faster beats for several minutes before dropping into a quiet second half made up of an arpeggio repeated to the point of insanity. Each of the four lengthy tracks single-mindedly flogs refrains to death, ending on Into the Sun with one chugging riff repeated ceaselessly as the song is slowly consumed by static. The effect is one of oppression and claustrophobia, the thick morass of sludge becoming almost unbearable at points. It’s a purposely uneasy listen, with few melodic respites. Even when the vocals are sung on ‘Into the Sun’ they sound gloomy and ominous.

The ‘doom’ tag is one they happily apply to themselves but while they’re as obsessed with tone as most doom outfits they’re not nearly as enamoured with fuzz as many of their bong-hugging peers. Instead their guitars are much more taut, their riffs more tactile, displaying little in the way of melody and much in the way of brute force. They bring to mind a slowed down version of post-hardcore outliers Coalesce at their most obtuse and menacing, a similarity aided and abetted the resemblance of throat shredding vocals of brothers Brian Barr and Danny Barr to Coalesce screamer Sean Ingram. They’re not just blasting out chords and luxuriating in the tone – the space between attacks offer no comfort, instead feeling threatening and tense. On ‘Towers of Dust’ each chord lands like a precision strike, with drummer Eric Diercks filling the space between the haymakers with pounding jabs and hooks.

If that makes it sound like music for masochists – well, that’s because it is. The best comparison is perhaps a doom version of the likes of Old Man Gloom and label mates Sumac – uncomfortable and uncompromising metal that confuses as many as it delights. When playing this slow there isn’t as much room for the kind of innovation and unusual angles that those bands find, but Aseethe make the most of the limitations of the genre, employing the occasional tempo shift to keep the listener wrong footed and amplify the atmosphere of uncertain dread. If they have hopes of failure then they’ve sabotaged themselves by being rather good. The flipside of Hopes of Failure is of course Fear of Success – if they keep progressing like this then that’s one fear they’re just going to have to deal with.