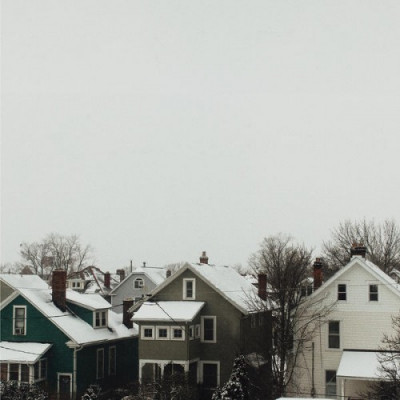 Below the House by Planning for Burial

Planning for Burial, aka Thom Wasluck, has a way of making a cacophony feel like a whispered secret. It’s hard to make heavy music sound intimate, but even at its loudest his mixture of doom, shoegaze and drone – which some call ‘doomgaze’ and some simply call ‘gloom’ – always retains a feeling of someone trying to impart something personal and meaningful. ‘Whiskey and Wine’, opening track from Below the House, is fairly minimalist in terms of moving parts – a single thudding chord repeatedly crashes down, punctuated by desperate guitar squeals and haunted by a spectral synth drone – but it’s decidedly maximal in its all encompassing din. Accompanying them is a simple, childlike melody plinked out on a xylophone.

And then the xylophone is joined by sleigh belles. It sounds cheesy at first, enough to raise a slight smile, but it quickly takes on an air of sadness, like a Christmas tree in a hospital. It’s a beautifully wrought juxtaposition, the warmth and innocence of childhood contrasted with the desolate, lost angst that comes later. It’s not a unique sound – bands like Jesu and Iroha have used a similar trick on some of their best tracks – but it sounds uniquely like Planning for Burial. Even though the vocals come in anguished screams it speaks volumes about its creator without a single decipherable word.

Below the House was written after Wasluck took an apprenticeship back in his hometown of Wilkes-Barre, Pennsylvania and moved away from New Jersey to live with his folks. From there his world receded to a daily grind of work and drink, the days all blurring into one. As such the album has the gray-scale hue of a shut ins resignation, imbued with the kind of sadness that scratches around your brain like a trapped, hungry rat. ‘On ‘Somewhere in the Evening’ we hear a moaned, slurred baritone alongside desperate shrieks, like the rambling voice and raging inner monologue of a drunk. A sad, twinkling piano adorns the massive, claustrophobic guitars and it feels like there’s nowhere in the world for you to go, nothing in the world worth seeing. It’s just you and the four walls, and all there is to do is try to bear the sadness without buckling.

But it’s not all as quite as straightforward as the tale of its conception might suggest. Planning for Burial’s albums have always been somewhat messy and inconsistent – as you’d expect from the result of one man’s compulsive solo recording. This is his most accomplished release, but is still no exception. On ‘Warmth of You’ it suddenly all goes a bit 80s, sounding like a clash between New Order and Type O Negative. In another time this would have been the highly misleading lead single. Then there are the twin instrumentals ‘Past Lives’ and ‘(Something)’, the former all ominous humming drones that sound like a rough sketch of a Tim Hecker track and the latter a brief, half-finished sounding moment of somber synth. In isolation all three are fine enough but back to back they make for a strangely sequenced middle section to the record, unfocused and a little thrown together. Perhaps that’s the point.

Either way the peaks are at least worth the few troughs. The two part ‘Dull Knife’ that follows is as majestically heavy and wounded as Planning for Burial have ever sounded. From the dream sludge racket of ‘Pt. I’, with its trademark earthquake distortion, woozy Loveless tremolo and distant, doleful vocals, through the 11 minute build from acoustic sorrow to coruscating heaviness that make up ‘Pt. II’, it’s a heartbreaking, heartbroken journey, a long slow ascent to the peaks of noise, like clawing yourself out of a hole and being blinded by daylight. As Wosluk repeats the longing refrain, “call me back home”, it’s unclear whether he means New Jersey or Pennsylvania. It’s unclear whether he knows which one he means.

Planning for Burial has always been an introverted, solipsistic project, but it’s rarely sounded quite as isolated and lonely as it does on Beneath the House. It’s not without its scrappy moments and missteps, but long time fans will know they’re as part of the fabric of a Planning for Burial record as the high points. And on Below the House those are more grandiose than ever, and yet somehow still as vulnerable and intimate as a late night confession.