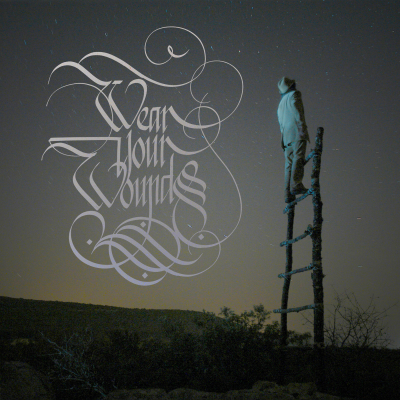 WYW by Wear Your Wounds

“We will survive
But it will take time.”

For all the things we know about Jacob Bannon’s private life – primarily through his lyrics and artwork for seminal hardcore band Converge (which has never shied away from reflecting on his personal experiences) – Wear Your Wounds’ debut album still feels rather shockingly bare. It’s there in the name, Wear Your Wounds: this is going to tackle Bannon’s scars head-on. It’s there in the music too; suddenly unable to hide behind the harsh vocal shrieks and thunderous, lightning-paced instrumentation of Converge, he sounds more vulnerable and open than ever. For as much as a song like ‘The Blood of Thine Enemies’ (released as a single in 2008 under Bannon’s own name) revealed further layers to the iconic frontman, he has certainly never produced anything quite as intimate as what can be found here.

Despite all the brief touches we’ve had over the years with his solo experimentation, Bannon hasn’t released anything really substantial since his Supermachiner project in 2000. Sure we’ve had individual tracks and demos in that time, but it wasn’t until the Wear Your Wounds / Revelator split in 2012 that it finally felt like a slightly lengthier offering was around the corner. Finally, half a decade after that initial teaser, we have a full-length album with the music being, for the most part, a continuation of that release’s rather tough-to-categorize sound.

Opening with the project’s title track was a good call; of all the songs here, this is the one that bears the most similarities to Bannon’s past works. Featuring distorted guitars, a powerful rhythm section, and a confident vocal performance that even features Bannon’s signature bark towards the end, these are all things that we have heard from him before. In fact, it almost resembles some of the slower Converge songs like ‘Wretched World’ and ‘Grim Heart/Black Rose’, a side of the band that has become increasingly more central to their sound over the years, so much so that they recently performed entire shows of it on their Blood Moon tour. ‘Wear Your Wounds’ stands tall as one of the album’s most memorable moments and is sure to be a popular staple of the project’s live show, which will hit the road shortly after the album’s release.

From the album’s second song, a blueprint for song structure is laid down, which, intentionally or not, the majority of the tracks end up following. This is most immediately noticeable in the one-two punch of ‘Giving Up’ and ‘Iron Rose’, both of which start with hushed vocal-led sections before culminating in rather lengthy but satisfying instrumental build-ups in the latter half. Of the two, ‘Iron Rose’ has the more rewarding payoff but both are great songs and carry the album’s momentum forward nicely.

Despite its somewhat awkward title, ‘Best Cry of Your Life’ is WYW’s liveliest moment, sounding almost like a full-blown shoegaze song. The vocals are buried deep in the mix with the drums and guitars coming to the forefront to create a swirling, whirlwind atmosphere that is on a grander scale than anything else on the record. Certainly it’s a breath of fresh air after what is a slight misstep in ‘Hard Road to Heaven’, which perhaps could have been replaced by ‘Adrift in You’ from the aforementioned 2012 split with Revelator. Of course, it makes sense to keep that release sacred by not re-releasing a song that is already 5 years old at this point but ‘Hard Road to Heaven’ just feels ever so slightly out of place, carrying an atmosphere that is closer to the ambient/drone of Bannon’s earlier solo experiments than the post-rock/slowcore leanings of the majority of this album.

‘Breaking Point’ and ‘Fog’ follow the now-expected Wear Your Wounds formula to a T, both concluding with emotional instrumental crescendos. ‘Breaking Point’ is especially heartwrenching, with a four minute guitar solo dealing most of the impact. These tracks are definitely highlights, but the slight repetitiveness of the approach somewhat dulls their impact in the greater context of the record. Certainly this is not Bannon’s strongest outing in terms of the overall album package, at least not for someone who was an integral part in creating some of hardcore’s most memorable full-lengths. That’s not to detract from the music here though; with the exception of ‘Hard Road to Heaven’ and perhaps the late album cut ‘Heavy Blood’, every song is compelling and deserves to be heard by even those with only a passing interest in Bannon’s work.

However captivating these songs may be, none are quite as masterful as the majestic closer ‘Goodbye Old Friend’, which channels an atmosphere similar to the tortured early works of Red House Painters and relies on little else than a melodic guitar and Bannon’s weary voice. In terms of pure emotion, this has to be one of the most heartbreaking songs of Bannon’s career; it’s unclear who exactly the “old friend” is but the sadness conveyed makes him a sympathetic figure. ‘Goodbye Old Friend’ is far subtler than a lot of the other songs on the record, ever-so-steadily introducing new instrumental elements to its sonic palette before bubbling over with a cathartic guitar solo at the end. It may have been a slightly strange choice as the first song released from WYW but it is undoubtedly the standout moment in the context of the whole album.

Having been in the works for years, it’s a relief to finally hear the finished product that is WYW. Even for those who have closely followed Jacob Bannon’s non-Converge work over this period, the general sound here will still present a few surprises. Complaints are few and far between and those involved with the project can be proud of the fact that they have managed to put out something quite unlike anything else their respective bands have done before. Hopefully it will be considerably less time before we see a follow-up album.