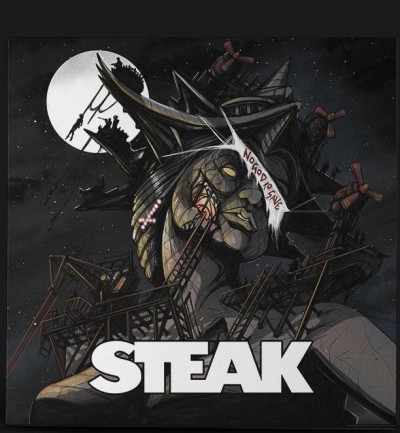 No God To Save by Steak

Kyuss. There, I said it. Just to ensure the elephant was out there, you understand. Steak‘s association with – and influence by – the desert rock pioneers is well documented. It is also hugely unfair to imply the London outfit peddle some kind of homage or pale imitation of something superior. What No God To Save emphatically demonstrates is that Steak is a band with talent, originality and, perhaps most importantly in what can often be a constrained genre, considerable diversity. These guys may tread upon sandy ground but this is music from Steak Valley rather than Sky Valley.

Opener ‘Overthrow’ bursts forth and, yes, hallmark stoner fuzzed-out guitars are present and correct but the vocals are more Eddie Vedder than any kind of slavish John Garcia-worship. ‘Coke Dick’ follows and the pace is rapid, the impact forceful. These guys rock. And they rock hard. For scene aficionados the reference points are more Garcia’s post-Kyuss projects Slo Burn or Unida. By track three, ‘Clones’, any residual notions of formula or pastiche are completely blown away. It’s an expansive, brooding, powerful number which proves heavy can be delivered as a mid-paced groove.

Of the remainder ‘Living Like A Rat’ is one of the record’s highlights, showcasing a catchy hook and a rhythm guaranteed to get heads nodding. I defy anyone to listen without succumbing to the desire to tap toes or strain neck muscles. It’s a highlight which deserves to see a Camden Underworld crowd moving in unison. Steak, however, are capable of making an impact on much bigger stages. This is a hugely enjoyable album from a damn fine rock band who can realistically go on to achieve on a level like Orange Goblin. Steak’s diversity is again demonstrated on album closer ‘The Ebb’, a gentle, atmospheric come-down from the preceding trip.