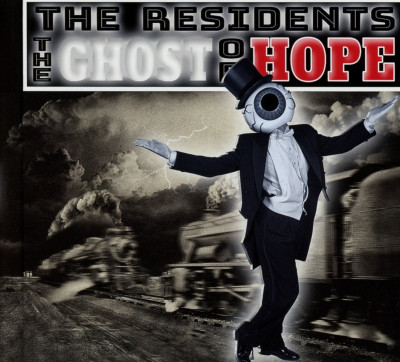 The Ghost of Hope by The Residents

If there’s one thing avant-garde pop-deconstructors The Residents can be relied on (beyond their infamous dedication to anonymity), it’s their perpetual state of reinvention. From their prolific experimentations in multimedia, to an increasingly complicated meta-mythology, the band continues to change itself as it goes forward.

The Ghost of Hope is no different, and feels like the start of yet another era, due to the departure of the Resident going by the name of Charles Bobuck. Yes, since 2010 the band members had been going under the aliases of Randy Rose, Chuck/Charles Bobuck and Bob[1] . Bobuck’s departure initially sparked concern, as from what little information about the members we have, it was understood that Charles was responsible for composing most of the band’s music. This would leave Randy (‘The Singing Resident’)as the sole original band member working on the first Residents studio album in quite some time, the last few years being either live recordings or individual spin-off projects.

The Ghost of Hope is not completely absent of Bobuck’s presence, however, as a recent email interview revealed: “There are bits and pieces that I remember having written scattered through it.  My playing is minimal.” But one has to wonder what direction this band now will take.

Last year I interviewed Homer Flynn of the Cryptic Corporation, and he described the new album:

“I’ve heard a few samples and, if anything, it probably harkens back more to [1979’s] Eskimo than anything else in their catalogue. They’ve done a lot of research and they’ve found a lot of stories… So they’ve found a lot of stories about trainwrecks, where these people’s lives were trainwrecks either before or after. And so they’re creating these sound collage pieces that consist of music – of course – but also a lot of sound effects, spoken word, singing. And these all blend together in a montage. Yeah, they’re interesting pieces.”

Given that Eskimo is often considered one the band’s greatest achievements, there’s certainly a lot to live up to with The Ghost of Hope. So it’s initially concerning that – interesting textures and production aside – the first two songs are so …normal. These pieces are certainly not without their moments (the coda to ‘Horrors of the Night’, and the welcome return of the band’s atonal Greek Chorus), but they also feel a little unoriginal, as if they could have been off any of the band’s last few albums.

With ‘Death Harvest’, this all changes. The first half of the piece is a dark ambient exploration that would fit well in any of the band’s 90s records, before exploding into a chaotic mess of pounding drums and the manic guitar of honorary Resident Nolan Cook. It’s here that the montage aspect of this record works so well, as the jarring jump in dynamics loses none of its impact over several listens. As the album continues, it’s clear that the most engaging and lively material emerges when the band embraces chaos. Both ‘Shroud of Flames’ and ‘Train vs Elephant’ keep things busy with layers of keys, dissonant guitars and heavily processed vocals to great effect.

In true Residents style, the liner notes lay out the concept of the album in more detail. Each song relates to a real-life train wreck, with the dates of all of them listed for the more curious of listeners. The lyrics inspired by these (often horrific) events focus on the victims themselves, humanising those who were either forgotten or known solely as a statistic of a tragedy. The closing song ‘Killed at a Crossing’ does this the best, excavating the mysterious story of a woman living behind multiple false identities (sound familiar?).

None of this would be as successful as it is without the album’s focus on production and collage. A low ambient hum persists throughout much of the record, along with the sound of trains and field recordings. The use of unquiet space – ‘Killed at a Crossing’ in particular – makes this one of the best sounding Residents records since the Mute years, and explains Flynn’s comparison to Eskimo. Eric Drew Feldman is credited with co-production, co-mixing and “additional instruments and computers”, so with any luck he will continue collaborating with the band as they continue on.

The Ghost of Hope feels like a transitional album, and while not without flaws there is more than enough to enjoy. Any fears raised by Bobuck’s departure can surely be stamped out, as The Residents fill his void with chaos and collage. It leaves one eager to see where this new iteration of the band will head next.

[1] Just to complicate things further, there’s currently another layer on top of this, with “Randy” afraid that his role in the band has been usurped by someone else. This name may not last much longer.