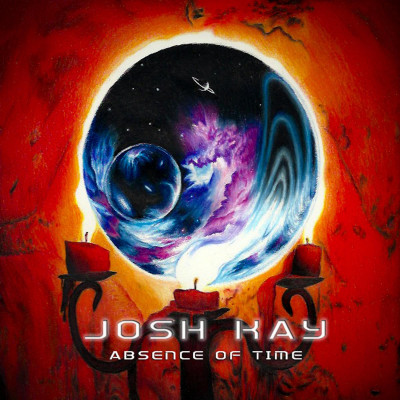 Absence of Time by Josh Kay

A fan of “guitar-centric” music, Josh Kay has been involved with the 6-string instrument since the age of 15. After diving head first into heavy metal, he soon ventured through a wider plethora of genres thanks to his experience of playing in bands. He has recently relocated to Los Angeles, CA, to focus on his solo work; meanwhile his band Tanagra are finalising their second album, Meridiem. His third instrumental project, Absence of Time, is evidently a further exploration into his musical interests.

Most songs on the release are around, or greater than, the 6-minute mark, ticking off the first requirement of a progressive metal album. The album is certainly relatable to progressive metal pioneers like Dream Theater, especially during the closing motifs of ‘Ravine’. However, instead of sections devoted to chin-stroking time signature changes, Kay draws on influences more akin to power metal; harmonising guitar lines, powerful chord progressions, and presumably, lots of hair flicks.

Kay states that he preferred an emphasis on “melody over calculable technique” (or incalculable for us humans). However, ‘The Legato Gestapo’ exemplifies his ability to craft blistering guitar lines. Because a solo or riff is complex does not by its nature mean it isn’t as good as something melodic, Kay generally manages to strike a decent balance. It is in the rhythm that accompanies the main guitar that there could be great work. The middle section of the title track does, however, contain some interesting flurries, as well as different instruments, that make the song that bit more interesting.

Despite his desire for melody, Kay certainly likes to demonstrate his ability and flair. Whether through a complicated guitar solo or the little licks he throws in between larger segments there are certainly plenty of guitar moments on this album. ‘Solace in Sleep’ and ‘Ocean Reveries’ show Kay’s ability to dial every down a few touches. Whilst these two songs aren’t without their virtuosity, they are a welcome calm in an otherwise instrumental and metal storm.

To be frank, releases of this nature suit fellow guitarists. It may be a struggle for someone who doesn’t play the guitar to get much from Absence of Time. The biggest drawback is that the elements asides from the lead guitar often tend to be overly simplistic. This may work if there were vocals or more instruments, but here, unfortunately, it causes the album to stutter a bit. Kay clearly has undeniable talent, and his lead guitar playing demonstrates his ability to tear it up with the best of them and certainly has the capacity to write interesting and decent melodies. The songs themselves could be more rounded, instead of focussing on that guitar lick, and instead how each part can build together for the purpose of the song.