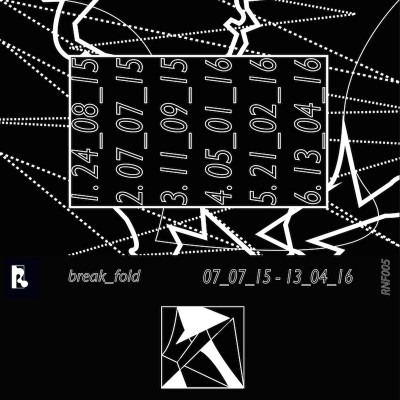 Ambient music has the ability to be both spare and rich simultaneously. Glitch ambient/dark electronica artist break_fold (Tim Hann) accomplishes both with his first release, 07_07_15 – 13_04_16. The album is atmospheric yet shaped: this is not a record where every piece sounds the same. Rather, they seem cut from the same color of different materials, formed into distinct garments.

At its most melodic (for example in the first track, ‘24-08-15’ and in the cinematic closing track, ‘13_04_16’), break_fold recalls glitch ambient pioneers Oval. Thoughtful use of repetition evokes Steve Reich, especially in the final piece. Other tracks favor electronic textures, rattles, hisses and footfalls against an icy thread of tonal landscape. The second track, ‘07_07_15’ slides easily from radio waves outward to the cold vastness of space. Here and there across the album, synth pads nod to ‘80s New Wave (in particular, the intros to Icehouse’s ‘Paradise’ and ‘No Promises’ come to mind), lending the music a nostalgic quality for anyone old enough to have those particular songs stamped in memory. Track four, ‘05_01_16,’ features birdlike trills and haunting animalistic moans framed against a repeating metallic motif whose quality gradually alters from menacing to affirming. Every sound used feels precise, chosen.

The quality of the album is no surprise given its origins in the five-year-old Reject and Fade label, who’ve made a mission of plumbing the UK’s “deep underground” in search of excellence in experimental music. Composer and musician Tim Hann (the brother of Reject and Fade’s Michael Hann) isn’t new to the music scene — he fronted the Leeds band I Concur in the late aughts — but 07_07_15 – 13_04_16 is an effective left turn from that group’s firm, intelligent rockers. Hann’s also mastered many of Reject and Fade’s previous releases. Careful musicianship is evident on his new venture, which includes even-tempered mastering by Tom Woodhead at Hippocratic (The Wedding Present, The Cribs).

The retro-styled artwork was created by Broshuda and tailored to accompany the limited-edition cassette release (available from OnoTesla and Ready Made Distribution). While appropriate, the art nevertheless appears as a lesser afterthought next to the meticulous soundscapes of the album itself. The album and track titles — named for the dates when work on each track commenced — at first seem weakly chosen. Hann, however, describes the album as “a record of memories and time-stamped bursts of creative activity.” With this annotation, the titles can lend the impression of transgressive diary-reading to the listening experience.

At its 30-minute EP length, this evocative album (expect different mental visuals with each track) leaves the listener wanting more — no mean stunt with ambient work and, we hope, an indicator of further break_fold to come.