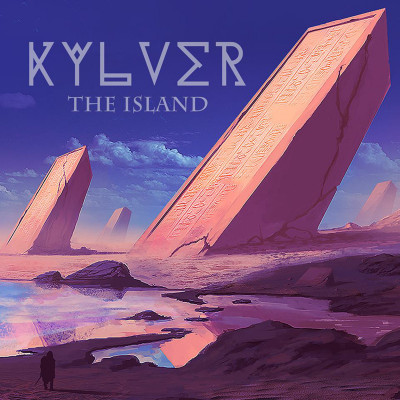 In a world dominated by singing competitions, shortening attention spans and shuffling music players – a five track, forty five minute sonic chronicle (a sonicle perhaps??) is a bold move. A move that so very few could pull off successfully, if at all.

Enter Newcastle upon Tyne four piece, Kylver. Four musicians who know how to craft a rocking tune. I’m not going to do the whole “influences” thing. One listen and it’s quite apparent who they wear on their sleeves. Any name that appears on that sleeve would be nothing but pretty bloody chuffed at the uniquely gargantuan sound that Kylver have created. Drums that would wake the dead, bass that tickles the brown note, guitars from the depths of a watery grave and an electric organ so fat and distorted yet teeming with melody and soul.

The first track hits you like a tsunami of sound. And brings with it all the watery cliches you could imagine. There’s sea shanties in there. There’s pirates in the background chasing you down. There’s swells smashing the bow of your vessel, churning up, rolling down. There’s countless Krakens and Gods threatening your voyage. The impossibility of the journey is nigh. But there IS hope. Constantly in the background the song has a spirit that WILL not be broken, come what may. This is exactly what I heard/visioned when I played ‘The Great Storm of 1703’ for the first time. I hadn’t read any reviews or even googled who the hell Kylver were at this point. Upon doing that it turns out, the album is a story of a crew of men setting sail to find a mythical “Island” that holds some magic portal dimension thingy… Whatever. The point is, I haven’t heard a song so accurately illustrated and descriptive in its sonic entirety since the epic rock musicals of the 70’s. I was there. I was the freaking First Mate! I was the crew member that got thrown overboard as the vessel sank. This is freaking awesome!! Forget VR, chuck on Kylver and close your goddam eyes!!

Holy shit, this was only track number one!!!! Where do I go from here? Well, let’s shut up and follow the mountainous siren song that Kylver create. By this point I had dragged my body across the desert island. I was staring at some huge monolithic structure. I was an ape, man, dude thing in Kubrick’s, Space Odyssey. Mesmerised at the obelisk that rose before me. I was holding a bone, crushing my primitive enemies. What’s this track called? No shit! ‘The Monolith’! Seriously, at this point the band’s illicit tapestry of sound is getting too good to believe. My head was becoming mush. Much like the Journeyman on the island whose mind was “turning into something he could not fathom”. Wait? What? Bugger me, these guys are good!

Needless to say, the rest of the album (you know, the TWO remaining, 20 minutes worth of tracks) takes you on an equally visceral adventure. An almost, erotically invasive aural cavity search. Just like a cotton bud in a dirty ear hole, it feels soooooo strangely good!!

The Island is a perfectly woven sonic tapestry. One that hangs high in a mythical world, telling a fabulously forbidden story. Like a chilling urban myth that shouldn’t be spoken, yet you can’t help but scream/whisper with too much elation to all who would dare listen. A fable to be played ever so loudly through your speakers. An album that beseeches you to play again and again. To put the music on loop as if it will never end. Almost as if the story itself will never end….