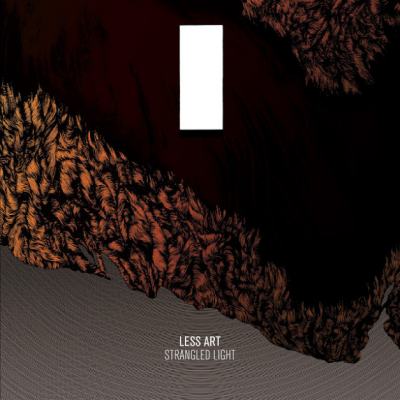 I love it when a musician starts a new band and completely confounds expectations; Less Art is a great example of this. The band are a bit of a post-hardcore supergroup of sorts, featuring 50% of Thrice, 50% of Kowloon Walled City and 20% of Curl Up And Die. It’s the latter that has provided me with such a pleasant surprise, with Mike Minnick straying from the guttural roars that dominated the chaotic canvas that characterised Curl Up And Die’s mathcore assault and delivering an impassioned, emotive vocal line over the self-styled ‘post-hardcore by post-youths’ musical palette.

The restraint that Minnick shows in both structure and delivery is perfectly aligned with the music, which takes the blueprint established by the likes of Drive Like Jehu, Quicksand and Fugazi, mixing in influence from both Thrice and especially recent Kowloon Walled City to create a record that feels authentic and oddly blue-collar in its roughness, but also manages the difficult feat of being reverential to what has come before, but also thoroughly contemporary. Over analysis aside, Strangled Light is just a bloody good record, in fact I would say it’s far better than I had expected; I’d even go so far as to say that I prefer it to recent output from both Kowloon Walled City and Thrice. Given I’m certainly a bit of a Kowloon Walled City fanboy, that’s actually a pretty big thing. This album is raw, it is emotional, bordering on the depressive, and it is staggeringly well crafted.

There are some cracking moments – Minnick bellowing “The system doesn’t work, the world is better without us” over a breakdown (not a beatdown, I should point out, there will be no circle-pitting here) over the end of ‘Pessimism as Denial’ is an exhilarating moment of release in a song that is one of the more aggressive ones on the record, building from an initial driving rhythm into a riff that crescendos perfectly across the course of the song, building naturally and organically into something very powerful.

The middle eight of ‘Optimism as Survival’ is a thing of beauty; a big slow lumbering riff with distortion crackling gently at the edge of the notes, it’s a change in pace from the rest of the song and it just feels massive and genuinely emotional. Lyrically it’s a bleak and complex beast as well, appearing to wallow in the depths of depression, but it also feels oddly hopeful with Minnick exhorting “I’m too curious to kill myself / everything passes, even doubt / what I can’t control will keep me down / I use optimism as survival”. It’s a curiously emotive experience, the recognition that the only direction of travel is up and the battered resilience that brings. It connected with me personally and I’m rooting for him to succeed.

‘Diana The Huntress’ is a pacey highlight that is reminiscent of Touche Amore and Drive Like Jehu and has a cracking riff that feels like it belongs on a tech album, which is topped with a hugely effective trade-off vocal. Meghan O’Neill (of Super Unison and formerly from Punch) contributes additional screamed vocal lines; her shredded vocals adding a level of poignancy to the lyrics, based on the true story of a woman that shot and killed a bus driver that inflicted sexual violence on the women of Juarez in Mexico.“I am an instrument / this is a message to those that think we are weak” It’s powerful, emotive and affecting stuff, aided by a wonderfully scuzzy production value that sounds, for want of a better word, real. It’s proper rough hands stuff – loud, raw and uncompromising, leaving the harsh edges on the sound and presenting it battered and beaten but authentic – in this way it complements and accentuates the voice of the record perfectly.

To be honest I’m still a little taken aback at how good this record is. As the run time proceeds we get the vitriolic ‘Crushed Out’, which is defined by a strikingly angular riff and a driving rhythm section, and a more reflective ‘What is it in Man?’ which brings the pace down and pushes brooding dynamics to the front, espousing a fractured, bleak philosophy over alternating delicate and driving riffs. Closer ‘Strangled Light’ rides in on a grinding riff, a powerful percussion line and a raging vocal line which sounds like Minnick is pushing his vocal chords to their limit. It’s a saturnine, serpentine beast, the main riff coiling around the bleak vocal lines; the crescendo build to a big riff release and a yelled “No-one comes back from the dead” raising goosepimples every time I hear it.

Post-hardcore is a difficult genre to get right. The template was laid over 20 years ago and there have been numerous attempts to replicate it, and a seeming relative comfort in the scene to faithfully retread the ground that Fugazi and Drive Like Jehu trod so successfully. Less Art have managed to carefully walk the line of being true to the genre, but also to bring their own influence and as a result have crafted a sound that feels modern, new and stripped to the bone of unnecessary frippery. Most importantly this album feels vital, authentic and the emotions in both the intricate songwriting and the impassioned delivery are raw and affecting. It’s a captivating listen, and one that I’ll be repeating over and over; I see this being a staple on my crowded turntable. I’ll put it this way – usually when I hear a new post-hardcore record, I have a burning urge to go and listen to Steady Diet of Nothing again. Not so with Less Art; I just have an urge to hit ‘replay’.