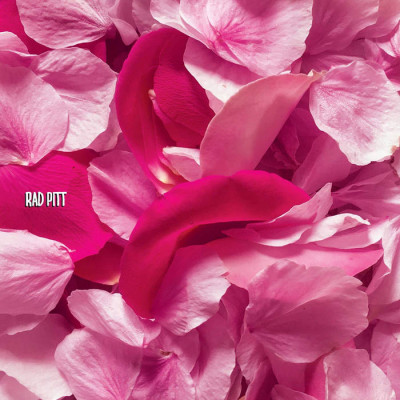 I think  it must be that I have been listening to too much doom recently because as soon as this album started it seemed to be over. On further research I realised that the whole things is only 18 minutes long!  The Rad Pitt’s second album Pink It’s short, brutal and angry, there is however quite a bit crammed into that 18 minutes.

The album opens with Hick Mucknall. It’s quite a gentle start, the two guitarist build a riff until drums and bass join in. The vocalist  tears into the track, his voice is scratchy and raw. It works as an interesting counterpoint to the guitar tracks, one of which is playing the melody backed by a crunchy rhythm. The second track Malachi by contrast Is short, dirty and nasty. NIce use of choppy guitar riffs and punchy bass, vocals reminding me of Frank Carter-era Gallows. ‘What’s The Point Of Piers Morgan’ continues in this vein.

Avalunche has a bit of a different feel, still raw but has a mathy/noise rock edge to it. The combination of this and the vocals is what makes this band something a bit different and something a bit special. Songs like this and ‘Hi God, You Suck’ vary in feeling throughout. The band’s dynamic is stunning, the guitarist and bass seem to bounce of each other. Vocals are consistently raw and scratchy throughout, backing vocals add a bit of depth and anger in places.

Tracks such as Return of the Wet Bandits and Help the rage-ed are a bit one dimensional, in comparison. Worst Dates although similar  has a feeling of absolute and utter despair to it. Shall I Shanty starts with a choppy jaunty guitar riff and vocals that would seem more in place in a Cornish seaside pub. The jaunt is short-lived as the guitar and vocals tear into life. Backing vocals are used to add to the noise. The guitar is angular and discordant at times on this track and Double Dare. It gives the tracks and slightly uncomfortable and dirty feel.

Listening through this album a few times I genuinely don’t understand why this band aren’t more well known. It’s nasty, brutish and short, full of anger and emotion. The musicians work exceptionally well together, the vocalist consistently screams with phenomenal power with other (both clean and scream) vocals adding to the chorus at times. Sometimes the riffs can induce a head-nod and thirty seconds later they are clashing and angular.

Maybe I tend to look in the wrong corners of the music world but there isn’t enough bands in the UK with this combination of raw emotion, anger and talent. The last album which gave me that thought was Gallows Grey Britain. Saying that, this band despite being around since 2015 and on their second album were under my radar until recently maybe there are many more to be discovered.